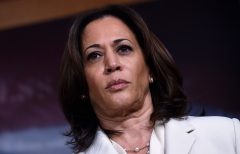 Vice President Mike Pence was right to nail the way Democrats have treated Supreme Court nominee Judge Amy Coney Barrett. He was also right to go after Sen. Kamala Harris for the way she has treated Catholic nominees for a federal court post.

Pence was pointed in his criticism. Harris, by contrast, was evasive.

"Joe Biden and I are both people of faith, and it's insulting to suggest that we would knock anyone for their faith," she said.

The issue is not whether Biden and Harris are "people of faith." They may be. The issue is whether they tolerate, or contribute to, anti-Catholicism. Being a person of faith does not automatically exonerate someone from charges of bigotry, and this is true even in cases when the target of the vitriol is someone of the same religion.

Pence brought up the anti-Catholic attacks on Barrett when she was being considered for a seat on the 7th Circuit Court of Appeals three years ago. Sen. Dianne Feinstein made an expressly anti-Catholic remark, saying to Barrett, "the dogma lives loudly within you." Sen. Dick Durbin was more coy, but just as obnoxious, when he implied that there was no room for "orthodox" Catholics on the high court.

Harris ducked a chance to address these remarks. She had no choice—they were indefensible.

Harris also dodged her own contribution to anti-Catholicism. In 2018, she badgered federal court judge nominee Brian Buescher, indicting him for belonging to the Knights of Columbus. Had he belonged to Antifa (which Biden says is simply an "idea"), he may have cleared the bar.

Harris wanted to know whether Buescher was aware that the Knights, a Catholic organization, accepts Catholic teachings on abortion and marriage. The obvious implication was that it is not acceptable for a practicing Catholic to sit on a federal court. She also asked, "Have you ever, in any way, assisted with or contributed to advocacy against women's reproductive rights?" In other words, only pro-abortion nominees to the federal bench need apply.

Biden's personal religious beliefs do not excuse him from failing to condemn any of these anti-Catholic remarks. Consider this in the light of the atheist-led Humanists for Biden, an arm of Secular Democrats of America, which is on record raising red flags about Catholic hospitals, suggesting we have too many of them. What's wrong with Catholic hospitals? They are places where "care can be dictated by religious doctrine."

If elected, will Biden act on this alleged problem by denying federal funds to Catholic hospitals? His organized atheist supporters have declared war on religious exemptions, so this is hardly a stretch. Why hasn't this professed Catholic condemned any of this? And if he is unaware of this, which is also not a stretch, it calls into question his readiness to assume office.

Biden has not only failed to denounce the support of anti-Catholics; he has on his payroll the Catholic-bashing Nikitha Rai; she is his deputy data director. Rai has publicly suggested that because Barrett holds traditional moral views on marriage and sexuality, this makes her "intolerant," and therefore not suitable to be on the Supreme Court. Once again, no Catholics who embrace Catholic teachings on these issues need apply. Perversely, that would not exclude Catholics like Biden.

Kamala Harris has made anti-Catholic remarks, and Joe Biden welcomes anti-Catholic individuals on board. Harris' refusal to go toe-to-toe with Pence on this issue proves how incontestable the evidence is.