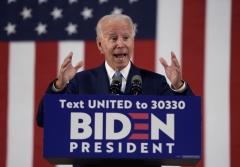 Joe Biden entered the senate in 1973, the same year the Supreme Court legalized abortion in its Roe v. Wade decision. He has evolved from being strongly pro-life to rabidly pro-abortion. Here is a list of his changing positions.

1974: He said that a woman seeking an abortion should not have the "sole right to say what should happen to her body."

1976: He votes for the "Hyde Amendment," which bans federal funding of abortions.

1982: He votes for a constitutional amendment allowing states to overturn Roe v. Wade.

1983: He votes against a constitutional amendment allowing states to overturn Roe v. Wade.

1984: He votes for the Mexico City Policy which bans federal funding for abortion referrals or counseling.

1987: He becomes chairman of the Senate Judiciary Committee and leads the fight against Supreme Court nominee Judge Robert Bork, whom he said was opposed to Roe v. Wade.

1994: He says, "those of us who are opposed to abortion should not be compelled to pay for them."

2012: He says the government does not have "a right to tell other people that women, they can't control their body."

2019: He says he is opposed to the "Hyde Amendment," which bans the federal funding of abortion.

2020: He says he supports abortion "under any circumstance."