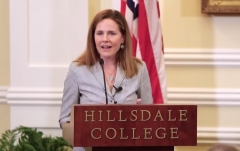 Distinguished historian Arthur M. Schlesinger Sr. once called anti-Catholicism "the deepest bias in the history of the American people."

That was in the mid-20th century. One might think that with the never-ending rights revolution and all the chatter about tolerance and diversity in the schools, anti-Catholicism would be a thing of the past. But as a new Rasmussen survey shows, this is simply not true.

In a national survey of likely voters, respondents were asked about the nomination of Judge Amy Coney Barrett to fill a vacancy on the U.S. Supreme Court. At issue was her Catholicism.

"Because the Catholic Church opposes abortion, should Catholics be prohibited from sitting on the U.S. Supreme Court?" One in seven voters (14%) said "Yes." But among blacks and those under the age of 40, one in four (26%) answered affirmatively. Only 8% of middle-age voters (40-64) and seniors (65+) agreed. Regarding political preference, 15% of Democrats said Catholics should be barred from serving on the high court versus 9% of Republicans.

The one anomaly in this survey is the response of black voters. We are living in a time of considerable racial unrest, and that social condition may well explain the distrust that African Americans are feeling about traditional institutions of authority; the Catholic Church is one of those entities. If so, this is more of an episodic response rather that a deep-seated one.

It is fashionable, especially in elite circles, to think that the most tolerant Americans are "liberal" Democrats. On the other hand, conservative Republicans are seen as the "deplorables," the rubes in need of tolerance training. But from Big Tech to higher education, it is clear that the most intolerant Americans are overwhelmingly leftists. They are the masters of the cancel culture.

The most disturbing, yet entirely understandable, finding in this survey is the revelation that young voters are more than three times likely to be intolerant of Catholics ascending to the high court than their elders. No doubt this is a reflection of their college experience.

Institutions of higher education should be the one place where the marketplace of ideas is honored. Instead, they have become venues for thought control. Students are taught that patriotism and respect for traditional moral values are not only obsolete—they are worthy of being purged from society. Hence, the intolerance to Catholics such as Amy Coney Barrett.

We don’t need more sensitivity programs—they are part of the problem—we need to deny federal funding to colleges and universities that are more interested in determining what students should think and believe than they are in allowing for a true diversity of ideas to flourish. There is no legitimate role for totalitarianism anywhere in American society, and the last place it should exist is on campus.