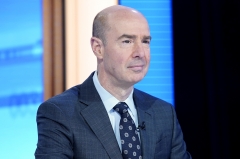 While political Washington’s attention is focused on the current shiny objects of spectacle – a Supreme Court confirmation battle here, the endgame of a multi-trillion-dollar legislative negotiation there – the quiet work of the federal government goes on. It may be outside the spotlight and off the front pages, but it is no less significant. One of the more successful men quietly laboring in these twilight struggles is the Department of Labor Secretary Eugene Scalia.

Scalia is President Trump’s second Labor secretary. He assumed command of the 15,000-employee agency just more than a year ago, on September 30, 2019, following the July 2019 resignation of his predecessor, Alex Acosta.

When Scalia took over, all within his domain looked well – job creation under the Trump Administration had surpassed 6 million as it approached its three-year anniversary, wage growth had been at or above 3 percent for more than a year and a half, and low-income earners had seen an almost 15 percent pay hike since Trump’s inauguration.

But then the coronavirus hit, and Scalia was challenged by a crisis no previous Labor Secretary had ever had to confront – the deliberate, forced unemployment of more than 40 million of his fellow countrymen, as a result of the lockdowns imposed by state and local governments dealing with the coronavirus pandemic. The unemployment rate, hovering at less than 4 percent for months before the arrival of the pandemic, shot up in a matter of weeks to almost 15 percent.

Other Labor secretaries likely would have reacted differently. They might have used the opportunity to issue draconian new regulations on businesses, in the name of “worker safety.” They might have demanded Congress appropriate additional “emergency” funding for new, additional hires to engage in new, additional regulatory efforts. They might have gone on well-publicized tours of factories and manufacturing plants, grandstanding as they scolded employers for not prioritizing coronavirus concerns.

Scalia did not. Rather than simply act for the sake of acting, he acted instead on a fundamental belief – as he put it, a belief that Ronald Reagan and President Trump share – that “the single best thing for working Americans – including women, minorities, and Americans with disabilities – is a vibrant, growing economy in which businesses compete to attract and retain workers.”

Instead of seeking to impose new regulations (some of which were being demanded by leaders of Big Labor unions), he worked to ensure the regulatory burden on employers did not get tougher. He wanted to increase the likelihood that the economy could recover faster, in the belief that what unemployed workers wanted most was not an unemployment check from the government, but their job back.

Now, five months after the imposition of the lockdowns and the forced unemployment of 40 million, the unemployment rate has been halved, and tens of millions are back to work. The number of unemployed persons is down to 12.6 million.

Meanwhile, the more mundane tasks of the Department of Labor have continued. The record $322 million in back wages recovered for employees in fiscal 2019 may not be matched in fiscal 2020 – what achievement will be, anywhere, given the pandemic lockdowns? – but it may be surpassed in fiscal 2021.

The same goes for investigations and prosecutions of crooked Big Labor bosses who misuse union funds, many of whom have been convicted under Trump. And Scalia has been a strong promoter of the USMCA, which will open additional opportunities for American workers, and which contains the strongest and most comprehensive set of labor provisions of any trade agreement in U.S. history.

Speaking in June of this year to The Heritage Foundation, Scalia averred:

“The genius of our Constitution is the autonomy it allows the people, and the ways it checks and limits government so that private individuals and institutions may thrive. A number of restraints by the government are essential, of course; so are government relief programs. But for all we’ve been forced to ask the government to do recently, we must not mistake government programs for the economic growth and opportunity that come only from the private sector. And we must not forget that it was limiting government, not expanding it, that delivered the extraordinary prosperity we enjoyed so recently, and to which we all want to return.”

That understanding – that limiting government, not expanding it, is what delivered the extraordinary prosperity to which we want to return, and is what he calls the “genius of our Constitution” – is the key to Scalia’s vision of the Constitution, his world view, and his approach to his job. It has served him well in his current position, and it will serve him well in any future endeavors.

Bill Pascoe, a political consultant, has been working to defend and extend individual liberty for 40 years.