Protect the Institutionalized and Defeat the Inhumanity of Eugenics 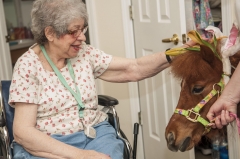 In 2006, I was invited to speak in Alkoven, Austria at a conference on human rights located adjacent to Hartheim Castle. Hartheim Castle was built in the ninth century and, in the 19th century, it came to serve as a home for children with physical and mental disabilities.

However, in the early 1940s, Hartheim’s humanitarian purpose was poisoned by the Nazi government as it began to use the castle for its T4 euthanasia program, a nationwide eugenics program managed by mostly German physicians with the intent to eradicate those seen as being unworthy of life—in this case, the institutionalized.

This included the incurably ill, mentally or physically disabled, the elderly, and the emotionally distraught. In the hierarchy of Nazi values, “inferiors” like these were exterminated. Indeed, it is estimated that the T4 program was responsible for the death of upwards of 200,000 individuals either by starvation, lethal injection, or poison gas. The T4 program started before the Holocaust, in which 6 million people, predominately of Jewish heritage, were murdered. During my visit, I toured Hartheim Castle where 30,000 of these so-called “inferiors” fell victim to the T4 program. It was a harrowing experience.

Unbeknownst to most Americans, the eugenics movement was becoming a “full-fledged intellectual craze” in the United States some 20 years prior to Germany’s T4 program. U.S. Supreme Court Justice Clarence Thomas documents this grim history in his concurring opinion in Box v. Planned Parenthood of Indiana and Kentucky, Inc.

Justice Thomas writes that the U.S. eugenics movement undermined the American education system, “particularly among progressives, professionals, and intellectual elites.” Perhaps surprisingly, “leaders in the eugenics movement held prominent positions at Harvard, Stanford, and Yale, among other schools, and eugenics was taught at 376 universities and colleges.”

Justice Thomas asserts that there was an aggressive movement to convince the government to enact eugenics laws targeting black people who were considered inferior to the white race. Thomas notes, however, that although race was pertinent, eugenicists did not qualify a person’s “fitness” solely by race. He writes that “a typical list of dysgenic individuals would also include some combination of the ‘feeble-minded,’ ‘insane,’ ‘criminalistic,’ ‘deformed,’ ‘crippled,’ ‘epileptic,’ ‘inebriate,’ ‘diseased,’ ‘blind,’ ‘deaf,’ and ‘dependent (including orphans and paupers).’”

As the scope of the atrocities of the Holocaust came to light, the U.S. eugenics movement was dealt a serious blow – it had been their ideology that facilitated the murder of millions. However, times changed, and in 1973 the U.S. Supreme Court passed Roe v. Wade, which led to the legalization of abortion throughout the entirety of pregnancy. Abortion as we know it today has become a vehicle for a modern-day eugenics program, this time under the banner of “choice” rather than compulsion.

Since 1973, the U.S. has permitted the legal murder of more than 60 million children. Tragically, upwards of 70 percent of mothers whose children are given a prenatal disability diagnosis, like Down Syndrome, abort to avoid the possibility of a disabled child.

Simultaneously, euthanasia confronts those who are institutionalized due to incurable illness, cognitive disability, old age, and medical dependency. In other words, the “dysgenic individuals” identified by Justice Thomas are still at risk today, both pre-born and born, but the basis for their elimination is disguised behind pleasant-sounding euphemisms.

Whether one earns the full rights of a human person increasingly depends on the degree of one’s cognitive capacities—an arbitrary and dehumanizing standard by design. If a person does not meet society's ever-changing criteria of humanity, then life-affirming care can be stripped from the individual by subjective decision-makers who adhere to what they call a “quality-of-life” assessment. Rather than recognizing the inherent dignity of all human life, this assessment focuses on productivity, utility, and economic status. Human rights and due process are noticeably absent under this new regime.

Indeed, since the first “end-of-life” case was heard by the New Jersey Supreme Court nearly forty years ago, the “right to die” has gained broader cultural acceptance with the near universal backing of academia, particularly in medical and law schools. New generations are taught that physicians are the arbiters of the value of life rather than patients themselves or their loved ones.

New laws and policies seek to enshrine subjectivity and “quality of life” assessments as paramount, to officially label some human beings as unworthy of life. Indeed, Michael Hickson, a 46-year-old disabled man who was starved and died from untreated sicknesses related to COVID-19 after physicians refused to treat him on “quality-of-life” grounds, represents one of the latest victims of our new regime. Mr. Hickson’s tragedy illustrates how we deny care to those who have become burdensome to us.

The deadly-by-design consequences of our new regime are abundantly clear in the coronavirus pandemic. It began at a nursing home in Washington State, the center of the first known virus outbreak in the United States. The virus rapidly made its way across the country in institutions that were treating the disabled and elderly who were dying in frightening numbers. Concern quickly grew that the pandemic was particularly deadly to this population, so much so that the Trump administration issued a stern warning not to treat these individuals any differently if they contracted the virus.

Inexplicably, New York began forcing patients who had already contracted the coronavirus into nursing homes with virus-free, at-risk patients. Unsurprisingly, New York quickly found itself dealing with an onslaught of deaths due to this high-risk population placed directly in the crosshairs of the virus.

The reaction of the nation is what you would hope as they were shocked and outraged with what was happening. Sadly, however, all the pandemic did was expose a prevailing attitude and what is occurring every day across countless nursing homes and health care systems: a prejudice toward the institutionalized, and the reality that we are a “throwaway culture” for those who have lost the ability to contribute in a way society decides is meaningful.

There are reasons for hope. Oklahoma Gov. Kevin Stitt recently signed the Nondiscrimination in Health Care Coverage Act, which puts an end to the rationing of health care based on “quality-of-life” assessments.

This is good news and underscores that laws exist to protect those most in need of protection.

Legitimate law and policy never endorse treating equal human beings as if they were not equal, or the violence, marginalization, or killing that makes such lethal bigotry a threat to our society.

Our hope lies in more leaders understanding the magnitude of what is happening and joining together with all walks of life – people of all ages, backgrounds, and beliefs to foster a more equitable and justice-oriented future.

Bobby Schindler is a Senior Fellow with Americans United for Life, Associate Scholar at the Charlotte Lozier Institute, and President of the Terri Schiavo Life & Hope Network.