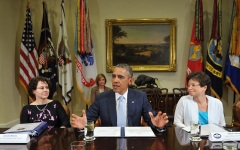 That Munoz held such a key immigration role for a president once skewered by the far-left as the “deporter-in-chief”—a label that was never serious and designed solely to intimidate the White House—is apparently the key reason for the push-back—one former DNC spokesman compared her record on immigration enforcement to that of Trump’s top immigration advisor, Stephen Miller.

While Obama did try and curb things like 2014’s unaccompanied child invasion by increasing family detentions, the far-left has nothing to fear. Munoz’s connections with pro-Hispanic, globalist, and outright anti-white extremism should be more than enough to keep them satisfied.

The transition team position will allow Munoz to handpick and place candidates in the thousands of appointee openings across the federal government, should Biden win in November. This is indeed scary. Up until now, Munoz has been a board member with Black Lives Matter-financier, the Open Society Foundation and a top official with New America: a “think and action tank” that presumably feels the “Old America” just wasn’t any good and fired a researcher critical of Google in 2017.

Before joining the White House, Munoz had worked for decades as a top official with the National Council of La Raza, the aggressively ethnonationalist organization which happens to have close, direct ties with a Hispanic activist so extreme he literally made a call to eliminate “gringos,” or non-Hispanic Americans.

In 1970, Jose Angel Gutierrez founded a political party that was basically like the American Nazi Party at the time, but for Hispanics. La Raza Unida, or “The United Race”, had a pro-reconquista agenda, supporting the reconquest from the United States of land formerly belonging to Mexico. A former House Democrat once referred to them as a party of “Nazis” for whom “only one thing counts… La Raza above all.”

During Gutierrez’s period with this group and well into his later activist career, he made the following public statements:

“Is it the duty of every good revolutionary to kill every newborn White baby?”

“Our devil has pale skin and blue eyes.”

“It’s too late for the Gringo to make amends. Violence has got to come."

“We realize that the effects of cultural genocide takes many forms—some Mexicanos will become psychologically castrated, others will become demagogues and gringos as well and others will come together, resist and eliminate the gringo. We will be the latter.”

(There are scores more like this, but you get the point.)

Despite these quotes being utterly terrifying, in 1994, La Raza decided to give Gutierrez its “Chicano Hero Award” for lifetime achievement. This was a time when Munoz was a top official there and she presumably had a hand in the decision. Why this wasn’t reported on by big media during Munoz’s White House tenure is unknown, but far from shocking.

Just a few minutes of half-clever googling shows some fairly tight connections between Munoz’s La Raza, and "eliminate the gringo" Gutierrez. For instance, La Raza’s president during Munoz’s tenure, Raul Yzaguirre, was a “close friend” of Gutierrez and helped lift his United Race party off the ground.

Also on Munoz’s watch, La Raza actively funded the Chicano Student Movement of Aztlan (MEChA), a pro-violence student organization that calls for the "return to Aztlan" or the “reconquest” of the American southwest, and from which La Raza has distanced itself as of late. While the details they offer about such a project are sparse, according to one former MEChA leader, it means “ethnic cleansing would commence” and that “non-Chicanos would have to be expelled.” In other words, race war.

Interestingly, Gutierrez’s groups and La Raza all got their start at roughly the same time and with help from the Ford Foundation—a philanthropic behemoth that’s become a chief financier of BLM. A California Senate report, quoting the Arizona Daily Star, said that “Ford Foundation money has been spent [on]…divisiveness, plus efforts to grab ethnic-group power.” Further, around this same time, an equally concerned Cesar Chavez responded to this issue by telling an interviewer “I hear more and more Mexicans talking about la raza…when you say ‘la raza,’ you are saying an anti-gringo thing.”

For eight long years, the establishment media sat on the fact that Obama’s top immigration advisor belonged to an organization that, at the very least, could have disavowed someone who’s consistently made calls for anti-white violence, but didn’t. Indeed, to see how easy they treated Munoz, see this softer-than-softball interview Munoz had with the New York Times during her White House years.

Conservative outlets failed to make these connections as well, however. They can’t afford to do so again. Being on Biden’s transition team will let Munoz pack key federal departments like DHS with her Open Society Foundation and La Raza pals. Then there’s her own appointment-in-waiting. Will it be DHS secretary? The nation’s key enforcer of our immigration laws?

The Trump campaign must sound the alarm over Munoz's documented extremism. With enough noise about her ties to Jose "Eliminate the Gringo" Gutierrez, Team Trump can show undecided voters that a vote for Biden is unquestionably a vote against America.

Bradley Betters is an attorney who previously worked in politics. He has written for The Federalist as well as other outlets.