Davos Elites See Themselves As The Knights of The Round Table 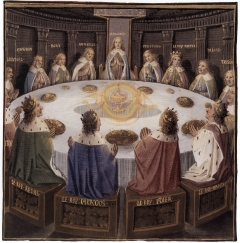 Knights of the Round Table (Getty Images)

Participants in the World Economic Forum (WEF) seem to have mistaken Davos for Camelot. After days of talking and revelry, they have sallied forth on their quest for the Holy Grail of global equity and carbon neutrality. Along the way, they have vowed to slay the dragons of disinformation. All this will be celebrated by approved minstrels.

If that sounds like a scene from Monty Python and the Holy Grail, you’re partially right. Like Monty Python’s knights, they try to delude us as well as themselves. King Arthur mimes riding a horse while his servant bangs coconut shells; Al Gore jets to Switzerland while prosing about the dangers of climate change.

More importantly, the attendees at Davos appeal to the misguided who believe they really do know the way toward global resilience, prosperity, and equity. Yet these self-appointed leaders are treading a path that is all too familiar: the road to serfdom.

Among the dragons they are battling is free speech. The WEF panel “The Clear and Present Danger of Disinformation” focused on a critical question: “How can the public, regulators, and social media companies better collaborate to tackle disinformation, as information pollution spreads at unprecedented speed and scale?” In this framing, “pollution” comprises toxic words as well as smoke. Perhaps one might even inhale a bad idea.

The panel was chaired by Brian Stelter, formerly of CNN and now at Harvard University. It included Democratic Congressman Seth Moulton and Arthur Gregg Sulzberger, the publisher of The New York Times, which published the 1619 Project despite errors flagged by its own fact-checkers.

One would think Matt Taibbi a better panelist, given his work in exposing how the FBI pressured Twitter to spread disinformation.

To be fair, Sulzberger expressed grave concerns over the state of the “information ecosystem” and the way that distrust in news sources leads society to fracture and shift away from pluralism, which endangers democracy.

Terms like “fake news,” he opined, evoke periods of repression, such as Nazi Germany. Furthermore, society has accepted “how much the information ecosystem has been poisoned.” Fixing it “will require real sustained effort from the platforms, from political leaders, the business leaders, and from consumers themselves to reject that.”

Yet linking President Trump to Nazis through one of his favorite phrases not only “poisons” the conversation but ironically reminds us of The New York Times‘s early support of Hitler and Stalin in the 1930s. It is hard to take seriously Sulzberger’s claim to address the toxic “ecosystem.”

Nevertheless, like all the other knights at Davos, he has answers. The solutions are to educate young readers about trustworthy news sources and for platforms to “differentiate and elevate trustworthy sources of information consistently… Until they do, we have to assume that those environments are basically poisoned.”

The Davos crowd believe they can make such judgments about what is trustworthy because they are the anointed (or “extraterrestrial,” if one is John Kerry). Falling prey to what F. A. Hayek termed “the fatal conceit,” they assume they can diagnose the world’s problems and plot a better path.

In his closing remarks, “The Road Ahead,” Børge Bende told panelists on the stage that he felt “we were very aligned.” Over the last five days, “progress has been made on scaling climate ambition, driving more equitable growth, and unlocking the benefits of frontier technologies.” Moreover, “by coming together like this, we can shape a more collaborative future.”

Yet in mapping “the road ahead,” the elite assume powers not voted to them.

How many failures in planning will occur? At what point will their good intentions lead to tyranny? Did we learn nothing from the pandemic, when government overreach led to economic, health, and educational disasters?

These are the kinds of problems that F.A. Hayek addresses in The Road to Serfdom, which traces how the good intentions of central planners lead to disaster. When planners “dispense with the forces which produced unforeseen results” and replace them with “collective and ‘conscious’ direction of all social forces to deliberately chosen goals,” they run into problems.

First, Hayek explains, planners trying to make judgments based on “fairness” discover that “nothing short of a complete system of values in which every want of every person or group has a definite place is necessary to provide an answer.” Planners must have powers “to make and enforce decisions in circumstances which cannot be foreseen and on principles which cannot be stated in generic form.” In fact, they must have practically unlimited powers: “a directed economy must be run on more or less dictatorial lines.”

The result, Hayek observes, is moral corruption: “just as the democratic statesman who sets out to plan economic life will soon be confronted with the alternative of either assuming dictatorial powers or abandoning his plans, so the totalitarian dictators would soon have to choose between disregard of ordinary morals and failure.” And such moral corruption, along with the corruption of language, seeps into every level of society.

But the Davos elite are different, supporters say. They’re trying to bring prosperity to everyone and save the planet.

If that were true, why would participants include the leader of a country who is holding an ethnic minority, the Uyghurs, in what is essentially a concentration camp? Would “equity” mean similar concentration camps everywhere? Would China provide the plans?

Davos is, like the Camelot in Monty Python’s film, an ideal projected by people unwilling to acknowledge the unintended consequences of their knight-errantry.

Rather than looking to the World Economic Forum for solutions, we should seek the wisdom of Hayek and others who founded the Mont Pelerin Society. As they knew, the best path forward is not the quest for a holy grail of equity, but the open road of freedom. Let’s take it.

Full version originally published by The American Institute for Economic Research under the title "Davos and the Holy Grail of Equity".