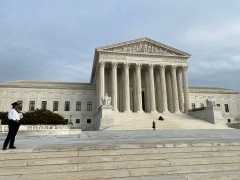 Featured is the Supreme Court of the United States in Washington, D.C. (Photo credit: DANIEL SLIM/AFP via Getty Images)

In watching the Senate confirmation hearings for Supreme Court justice nominee Amy Coney Barrett, it appears that it’s business as usual in Washington D.C. Every time there is a nomination for Supreme Court appointed by a president who isn’t from their party, the opposing party attacks with everything they have to keep the nominee from getting through the approval process.

Oh, wait a minute… let me double check something....

Okay, after a full 30 seconds of research, it is actually only when the nominee has been put forth by a Republican president. Nominees from a Democratic president sail through, even when the Senate has had a Republican majority.

But too often, when a Republican president nominates a justice, be it Robert Bork, Clarence Thomas, Neil Gorsuch – who was filibustered – and, of course, the circus that was the Brett Kavanaugh confirmation, the Democrats in the Senate go for the jugular.

Of course, politics comes into play. There’s no way it can’t.

Democrats have been clamoring how inappropriate it is to go forward with the nomination process in an election year.

But Democrat voices were singing a different song in the last presidential election cycle.

The Democrats launched a major campaign to give Merrick Garland a confirmation hearing in 2016 -- an election year -- but it was squashed by Senate Majority Leader Mitch McConnell. According to the media and prominent Democrats, it was the Senate’s “duty” to give President Obama’s nominee a hearing, despite the looming election.

We were even told in the vice presidential debate by the Democrat VP nominee, Kamala Harris, that Abraham Lincoln even selflessly held off on a SCOTUS nomination until after his upcoming election so that the voters could have a say, and that his shining example was the standard to which we should adhere.

There’s only one small problem: that’s not exactly what happened.

According to National Review’s Dan McLaughlin and historian David Donald, the Senate was not in session at the time there was a Supreme Court vacancy – but Ms. Harris was correct, it was 27 days before the election - so good ol' “Honest Abe” put forth several potential nominees…and they went out and campaigned for him. Yep, it appears that Abe was playing politics.

After winning re-election, he made his nomination right after the next Senate session began, and Salmon P. Chase was confirmed the exact same day.

So, Ms. Harris, my feelings can be summed up by my favorite Lincoln quote, “don’t believe everything you read on the Internet.”

In fact, politics has affected the SCOTUS nomination process many times over our nation’s history.

There have been numerous times when Supreme Court vacancies have occurred in an election year.

Amy Coney Barrett is an outstanding choice for the Supreme Court, but in the minds of the left, because of her religious views, she is incapable of ruling fairly, something that – to my knowledge – she has never been accused of any time in her career.

When President Obama’s SCOTUS nominees, Elana Kagan and Sonya Sotomayor, were going through the confirmation process, there was no grandstanding by Republican senators, no protests, and no hearings with witnesses with shaky stories trying to discredit the nominees in order to hold up the process, and in fact, several of the GOP senators voted for both Kagan and Sotomayor, despite being in the minority, and being nominated by a Democratic president.

Character assassination only seems to happen with the Democrats.

So, this is nothing new.

What is relatively new – although it was put forth by Franklin Delano Roosevelt back in the 1930s - is the idea of packing the Supreme Court. What exactly does packing mean? It means adding justices until you get the majority that you want, so it could be 11 justices, 13, or even 15, whatever it takes. Senate Minority Leader Chuck Schumer won’t discount that as a possibility and several others on the left seem to be in favor of it.

This would have a drastic impact on the court, likely making it a rubber stamp for a Democrat president, provided it was packed with liberal justices.

What does the Democrat presidential ticket have to say about that?

Well…nothing. They wouldn’t even address it in previous debates. When asked about it during the debate, Joe Biden said that he wouldn’t give his position, because Trump would use it against him. He was later asked about court packing by a reporter who point-blank asked, “don’t the voters deserve to know?” Biden replied, “no, they don’t!”

Seems like I’ve heard this line of thinking before.

“We have to pass the bill, so you can find out what’s in it.”

I was satisfied with my own private insurance at the time; turns out I could not keep my plan, and my doctor wasn’t in the Obamacare system.

So, forgive me, but I’ve played this game once already.

Every American should be concerned about a candidate that won’t tell you what they will do with one of the three branches of our government until after the election.

All Americans should be calling for Joe to tell the truth on this matter, although it sounds like Joe has some bigger problems brewing right now, according to the New York Post.

But he’s got the media on his side, so who knows if it will even faze him.

Pray for our troops, our police, our country and the peace of Jerusalem.