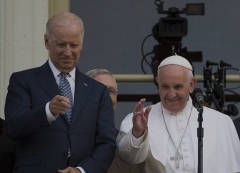 (CNSNews.com) - President Joe Biden said at a press conference in Madrid, Spain, today that he was “going to do everything in my power” to keep abortion—the killing of unborn babies-- legal in the United States.

“I’m going to do everything in my power I legally can do in terms of protecting abortion, as well as pushing Congress and the public,” Biden said, as reported by CNBC.

Biden also indicated he would support suspending the Senate filibuster (which requires 60 votes to end debate on legislation and bring it up for a vote) so that the Senate can codify Roe with a simple majority vote.

“I believe we have to codify Roe v. Wade into law,” Biden said. “And the way to do that is to make sure Congress votes to do that.”

In a 2012 debate with Rep. Paul Ryan (R.-Wisc.), who was the Republican candidate for vice president, Biden said that he believed life begins at conception. But he presented his belief as one rooted in religion not biological science.

“My religion defines who I am and I’ve been a practicing Catholic my whole life,” Biden said.

“And it has informed my social doctrine,” he said. “Catholic social doctrine talks about taking care of those who can’t take care of themselves, people who need help. With regard to abortion, I accept my church’s position on abortion as a—what we call—de fide doctrine. Life begins at conception in the church’s judgment. I accept it in my personal life.”

In his public life, he believes in the legalized killing of unborn babies.