Chick-fil-A wants out of the culture war.

News broke Monday that the fast-food chain would no longer donate to the Salvation Army and Fellowship of Christian Athletes, two organizations that hold traditional views on marriage and sexuality. Instead, the Atlanta-based chain will now focus its charitable giving on three causes: education, hunger, and homelessness.

Chick-fil-A says this streamlined approach will provide more “clarity and impact” in its giving. But the company’s president and chief operating officer, Tim Tassopoulos, recently revealed what is likely the real reason for the shift: Chick-fil-A wants access to new markets, and bad publicity is getting in the way.

In a recent interview with Bisnow, Tassopoulos acknowledged that Chick-fil-A had been “taking it on the chin” for years, and that recent headlines made it difficult to expand. Now, he says, they want to be “clear about who we are.”

Amid backlash from conservatives, Tassopoulos said that “no organization will be excluded from consideration” in charitable giving, “faith-based or non-faith-based.” But that’s little consolation since the signal had already been sent: Chick-fil-A wants “new markets” to know it’s made a change.

Chick-fil-A’s expansion efforts have run into obstacles in more progressive parts of the country. Just this year, Chick-fil-A lost franchise deals in San Antonio and in Buffalo, New York, and most recently in England, over its past donations to groups that hold traditional views on marriage.

The reality is unavoidable: Being known as a conservative Christian brand is bad for business in liberal cities.

“When there is a tension,” Tassopoulos said, “we want to make sure we’re being clear.”

In other words: “We’re turning a page. We’re not bigots, so please, buy our sandwiches.”

Really @ChickfilA? This is the direction you want to go? You’ve garnered the unconditional support of millions not in spite of but BECAUSE OF your stances, which is the sole reason you’re successful. Idiocy. Bye! https://www.nationalreview.com/news/chick-fil-a-to-end-donations-to-christian-charities-after-lgbt-backlash/ …

Chick-fil-A said that it has stopped donations to a pair of Christian organizations after receiving backlash from LGBT rights activists.

4,565 people are talking about this 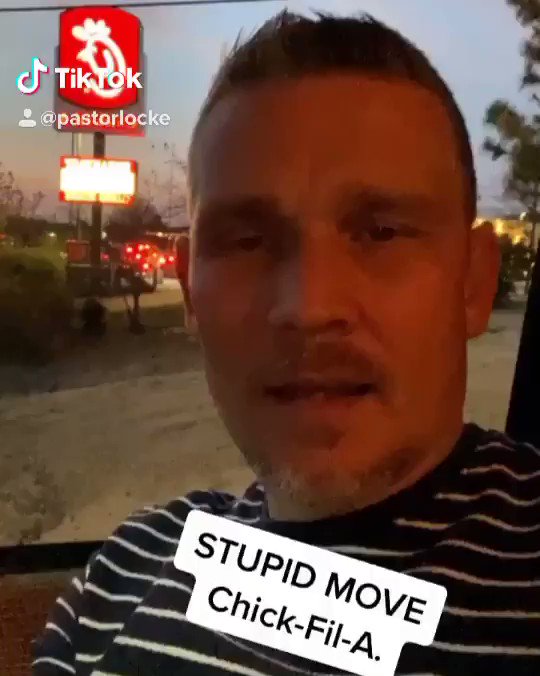 2,016 people are talking about this

Shame, shame on you, @ChickfilA. You are the 3rd most successful fast food franchise in the US. You had no reason to capitulate. But you did. Yes, shame on the progressive bullies too -- yet the greater shame is yours, Chick-fil-A, you cowards. https://www.theamericanconservative.com/dreher/chick-fil-a-surrenders-to-lgbt-bullies/ …

1,332 people are talking about this

Chick-Fil-A has survived and thrived because they served everyone AND refused to cater to the cancel culture. Now they’ve caved at the behest of the censorious Left. This is a terrible move and just the latest indicator that the center cannot hold. https://twitter.com/realdailywire/status/1196464856246808576 … 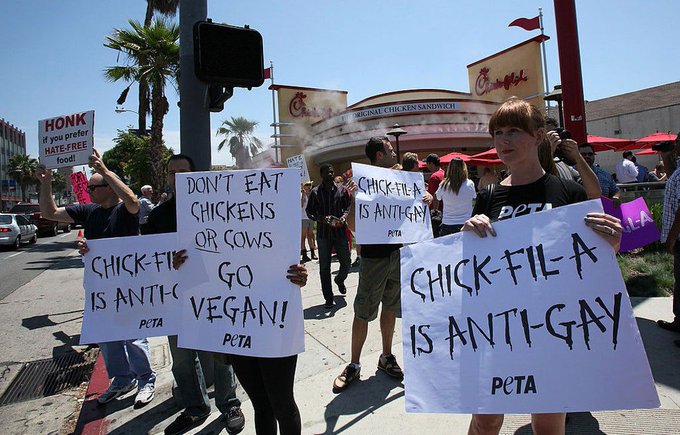 8,949 people are talking about this

In Aug 2012, I coordinated a national @ChickfilA Appreciation Day after they were being bullied by militant hate groups. Millions showed up. Today, @ChickfilA betrayed loyal customers for $$. I regret believing they would stay true to convictions of founder Truett Cathey. Sad.

5,627 people are talking about this

Let’s Remember How Chick-fil-A Got So Big

Support Chick-fil-A Day was a critical flashpoint in all this. The company’s founder, Truett Cathy, had spoken out against gay marriage, and the progressive backlash was fiece. Gay couples staged kiss-ins at Chick-fil-A restaurants across the country in protest.

That’s when Chick-fil-A received a groundswell of support from sympathetic customers. Cars wrapped around blocks as loyal supporters, like myself, waited their turn to buy food and express their appreciation.

Chick-fil-A took on transcendent meaning that day. It proved to us, and to the world, that Christian conservatives could band together and help each other succeed in the face of ugly taunts and bullying. It proved that we didn’t have to submit to progressive orthodoxy on sexuality. We could be true to our convictions and still succeed.

Chick-fil-A’s courageous stand earned it millions of loyal customers. That year, 2012, was pivotal for the company’s earnings. Despite the “bad PR,” Chick-fil-A sales soared by 12% and then by 9% the following year.

Today, Chick-fil-A is the third-largest fast-food chain in America. It turns out being true to your convictions doesn’t have to be a business killer.

That raises the question why on earth Chick-fil-A thought ditching its convictions could ever be a good idea.

If Chick-fil-A made this decision for business reasons—and that’s undeniably clear from the president’s statements—it reflects an abysmal miscalculation. Chick-fil-A apparently thinks it can part with its convictional past and win the favor of progressives without losing its loyal base.

What naiveté. If there’s any basic rule of the culture war, it’s that the left will never love you if you have held to traditional Christian values. Their affection is fool’s gold.

GLAAD, one of the nation’s leading LGBT organizations, says Chick-fil-A’s new giving philosophy should be met only with “cautious optimism” because after all, it still has a long way to go. Chick-fil-A must fully repent of its sins by “unequivocally [speaking] out against the anti-LGBTQ reputation that their brand represents.”

There is no mercy for bigots. Only perpetual demands for self-flagellation and the disavowal of former convictions.

Chick-fil-A thought it could straddle the culture war. Its naïvete is backfiring.

Chick-fil-A, like all companies, exists first and foremost to make money. That’s not an evil thing. It’s perfectly valid, and it’s a fact of life. Profit is king in the business world, and any conviction that doesn’t translate into dollar signs inevitably becomes a liability.

Chick-fil-A has reached a juncture where further expansion will have to come at the price of conformity to the values of new markets. That means it will have to choose its master: God or mammon. And as the Scripture says, you cannot serve both.

Chick-fil-A’s choice—mammon—is particularly disappointing because there was no need for it. Chick-fil-A had slain the fast-food dragon. It had won.

What message does its caving to pressure send to smaller, less powerful Christian companies? If Chick-fil-A can’t thrive while giving to traditional Christian ministries, what other business can?

And what message does it send to LGBT activists and agitators? It tells them they can win, if they just bully Christian organizations for long enough.

Also, consider that Chick-fil-A’s decision comes at a time when other corporations are actually going beyond their consumer base and pushing truly radical ideas. Consider Sprite’s recent advertisement that glorifies gender transition.

This is a Sprite commercial. Coca-Cola company owns Sprite. I am never buying Coca Cola products ever again!

873 people are talking about this

Or consider Mattel’s recent release of gender-neutral dolls for kids. Or Converse’s new line of pride-themed gear featuring LGBT youth and a child in drag. Or the litany of other companies supporting Pride Month.

I don’t think the market is driving these trends. These companies aren’t chasing the sexual revolution; they’re driving it. The higher-ups in the Fortune 500 world want to out-virtue-signal their friends in other companies, and they’re getting way out ahead of the market to do so.

Why can’t Chick-fil-A be half as bold?

To me, and to many other Americans, Chick-fil-A means more than a great chicken sandwich and waffle fries. It means more than sweet lemonade on a hot day, a warm greeting, and “My pleasure” at the window.

Chick-fil-A means that in a dark world, Christian entrepreneurs can make it if they create a good product, build trust with their customers, conduct themselves with honor, and stand nobly by their convictions—whatever may come.

With every retreat, Chick-fil-A will lose a piece of what’s made it so special, and the light it has been will dim.

So, Chick-fil-A leaders: Please, realize what you’re doing. Realize the stewardship role you have in a darkening culture. Don’t hide your light under a bushel. We need you to remain a lampstand in our world.

(Courtesy of The Daily Signal.)