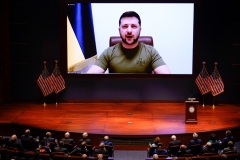 Hardliners in the U.S. and Europe have spent the last four months agitating for Western escalation in Ukraine with the goal of erasing the remaining limits on direct U.S. and allied involvement in the war.

Max Boot is the latest one to insist that it is our war: "We keep thinking it’s their war. We should understand that this is our war — and act accordingly." As usual, Boot is wrong in his assessment and in his prescription. While there is no shortage of pundits and politicians that keep trying to make it our war with proposals for no-fly zones and breaking blockades, this is not America’s war to fight, and we should not think of it as our war. It is one thing to provide military assistance to a country that has been attacked in order to repel aggression, but it is something entirely different to see it as a war that our government is responsible for winning. Erasing that distinction invites and practically requires escalation and a wider war, and that would lead to disaster for the U.S., Russia, and Europe.

Boot’s call for a massive increase in Western weapons supplies is dangerous in several ways. If the U.S. did as he wanted, it would intensify and prolong the war, it might provoke further Russian escalation, and it would make it more difficult to keep the war from spreading beyond Ukraine. The more weapons that the U.S. and its allies pour into Ukraine, the greater the incentives the Russian government will have to target Western supply convoys and possibly even neighboring allied countries. The conceit that the U.S. and its allies should provide unlimited arms to Ukraine until it "wins" puts Ukraine on a path to what would likely be many years of grinding conflict. A policy to "win the war" against Russia would further impoverish and break Ukraine, to say nothing of the destabilizing effects that a prolonged war will have on Europe and the rest of the world.

U.S. and allied support has already encouraged Ukraine’s government to set unrealistic goals in the war. The Washington Post reported in mid-June: "The support appears to have emboldened the government of President Volodymyr Zelensky, who this week vowed to retake all of Russian-controlled Ukraine, even areas annexed by Moscow long before Russian President Vladimir Putin’s Feb. 24 invasion." Even if this were possible, continuing the war until this definition of victory has been met would be devastating to Ukraine and to the many nations that rely on Russian and Ukrainian grain shipments. Further increasing weapons supplies would give the Ukrainian government more encouragement to pursue these maximalist goals.

It is true that the U.S. has spent relatively little to support Ukraine compared to the extraordinarily wasteful spending on unnecessary U.S. wars elsewhere, but that doesn’t explain why the U.S. should be prepared to commit even more resources to someone else’s war. The massive outlays that the U.S. frittered away on its wars over the last twenty years brought it no closer to anything resembling victory. It is doubtful that throwing more money and weapons at the war in Ukraine will achieve anything at an acceptable cost.

Boot’s answer is a form of make-believe: "Policymakers should keep asking themselves, 'What would we do if GIs were dying in Donbas?' and act accordingly." Making policy on the basis of fantasy may be appealing to Boot, but it is irrational and absurd to think about the problem this way. If U.S. troops were dying in Donbas, the U.S. would already be fighting a major war with Russia, and that is the outcome that Americans must do everything we can to avoid. Pretending that the U.S. is already directly at war with Russia is the fast track to ensuring that it soon will be. Not only is the war in Ukraine not "our war," but it is imperative for the sake of our security and that of the rest of Europe that it never becomes "ours."

If prolonging the war indefinitely is too costly, the best way forward is for the U.S. and allied governments that have supported Ukraine to urge Zelensky to negotiate a compromise peace. The U.S. should make clear that it wants a return to the pre-Feb. 24 status quo and that it isn’t going to provide open-ended backing for a campaign to take Crimea. To that end, the U.S. and its allies should communicate to Moscow that they will be prepared to lift sanctions imposed this year in exchange for full Russian withdrawal to their pre-Feb. 24 lines and the payment of reparations for the destruction caused by the war. The alternative would be a grueling stalemate that claims many tens of thousands more lives and leaves Ukraine much worse off. That is the ruinous path that Boot and other hardline cheerleaders for "victory" would take us down.