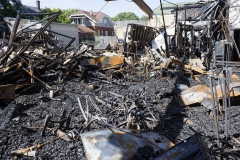 Pictured is the aftermath of a riot in Kenosha, Wisc. (Photo credit: Andrew Lichtenstein/Corbis via Getty Images)

A dark cloud looms over the United States today — a storm cloud of tyranny. All the rest is noise — a diversion.

If self-congratulatory pats on the back could cause skin damage, Trump haters would have leprosy. Having been on a witch hunt to burn him at the impeachment stake since he took office, they believe they are vindicated forevermore.

But apart from their brutal mistreatment of President Donald Trump from the beginning through their coordinated and malicious hoaxes that incidentally rejected lawful election results (in 2016), and apart from the question of whether they have some legitimate complaints against him, this is still not mainly about him. In a few days, he'll be gone. This is about whether America will descend into tyranny.

Just as the left exploited COVID-19 to damage the economy and President Trump's political fortunes (as the Democratic New York governor's and Chicago mayor's recent call to reopen their economies demonstrate), and just as it milked the virus to exercise unprecedented control over Americans, it is now exploiting the Capitol riot to shame conservatives into succumbing to its efforts to further consolidate its power and erode our liberties.

I would love nothing more than to turn down the volume, take a breather from politics, and pretend that partisan strife can be overcome by virtue-signaling platitudes, but that would be a delusional, selfish cop-out. Unless we no longer believe in American exceptionalism, the principles of limited government, and the blessings of liberty, we are honor-bound to continue the fight.

Whatever caused the breach of the Capitol, whatever percentage of the malefactors were Trump supporters, and no matter how much their complaints coincide with those of the 74 million Trump supporters, their misdeeds do not taint the entire lot of us or what we stand for. They do not render moot our concerns over election integrity.

The overwhelming majority of Trump supporters oppose and condemn violent riots, including the riot at the Capitol, and they strongly sounded the alarm about them during the left's march of mayhem and anarchy throughout America's cities last summer. For the most part, Democrats who are now decrying riots remained silent. Many of those who voted for Trump's impeachment have literally called for political violence.

Additionally, millions still believe (and observed) that there were massive election irregularities and that COVID was cynically used to relax voting procedures, which led to most of this insanity in the first place. All these efforts to demonize Trump and intimidate his supporters will not make them believe otherwise, and it will not calm the turbulent waters of political unrest in the country.

Did you read the articles of impeachment? You might find Trump's speech to his supporters objectionable, but to say that he willfully encouraged violence, when his actual language called for peace, and to use that as a specification for impeachment is chilling, especially when we have evidence that the riots were planned far in advance of his speech (per CNN, no less).

Just as troubling, did you see how this Democratic-controlled Congress, with the help of 10 Republicans, snuck in the "fact" that Trump "reiterated false claims that 'we won this election, and we won it by a landslide?'"

You may think Trump's claims are outrageously false, but do you believe the Congress of the United States has any business declaring the expression of such an opinion an impeachable offense? Trump is entitled to his opinion until his dying day, as are the millions of Americans who share it. There is no question that Trump's legal efforts to challenge the election failed — that's a fact. But the leftist narrative that Trump's allegations of election fraud "are false and not supported by the evidence" have been inserted in every liberal-media news report since Trump first started challenging the election. In other words, they dismissed these claims as factually false way before they'd even been formally filed. Now Democrats have outrageously memorialized their narrative in their articles of impeachment.

Even if the election-night shenanigans didn't change the result of the election — and I'm not sure we'll ever know for certain — way too many suspicious things occurred that night, and way too many state laws were changed in the middle of the stream to relax voting procedures. Many warned this could potentially lead to misconduct and rampant distrust in the election results. If election-integrity reform measures aren't undertaken, I don't see how it's possible to restore confidence in our system.

Feel free to call us hypocrites in an effort to shame us into silence about the Democrats' double standards on violence, rioting, and threats to our democratic system, but the issue isn't hypocrisy. That, too, is a distraction. The issue is whether the left, in reality, is threatening our liberties, about which there can be no reasonable doubt.

Whatever you do, don't take your eyes off the big ball of leftist tyranny. This nation is now under siege by the digital oligarchy, which is censoring political speech with every bit as much power as an authoritarian government. It is about to be under siege by a Democratic-controlled government, one of whose prominent members, Rep. Alexandria Ocasio-Cortez, is threatening to create an investigative commission to "rein in" the media following the D.C. riots.

Go ahead and bark about President Trump's intangible so-called threats to our democracy, but while you're falling for that diversion, understand that many Democrats are on the verge of proposing concrete measures to undermine our constitutional system in ways that will ensure their permanent majority, from opening our borders to turning territories into states to legislatively neutering the Electoral College to enacting federal laws that legalize obscenely lax voting procedures and more.

While you're busy hating on Trump and his supporters, ask yourselves whether conservatives ever call for the silencing of their political opponents. The answer is never, or almost never.

In the meantime, leftists are purging conservative speech and conspiring to destroy conservative digital competitors. Leftist students at Harvard University seek to ban Trump administration officials from speaking on their campus and are now calling for revoking the degrees of Trump supporters and aides. Where are the long-lost civil libertarians in the Democratic Party?

It is a well-rehearsed fantasy that Trump supporters threaten democracy. It is an observable fact that the left does.

Be peaceful, but stay vigilant, because freedom is "never more than one generation away from extinction." Indeed, we are well into that menacing generation today.