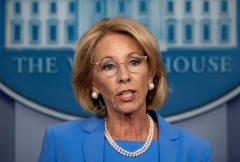 The FPU Ravens took home the 2019 NCAA Track and Field Championship national title in the women’s 400-meter hurdles won by an athlete who had previously competed on its men’s team. During the season, the runner identifying as a woman but who is biologically male, dominated female competition and was celebrated “Women’s Track Athlete of the Week” by the Northeast-10 Conference.

CWA saw in this case and others how the future of women’s sports was at risk and how the equal rights of female athletes were being infringed. We filed a formal civil rights complaint against FPU in response to this injustice.

Title IX requires equal educational benefits and opportunities for students, including in athletics, on the basis of sex, not gender identity. The federal law extends to any school receiving federal financial assistance, including public K-12 schools and virtually every college and university in America.

OCR agreed with CWA that FPU had violated Title IX equal opportunity protections for female athletes. The university chose to enter a resolution agreement, requiring it to “rescind its transgender participation and inclusion policy” and “cease any and all practices related thereto.” This notice is also required to be posted in a prominent location on its website.

For girls fearing their chance to compete on an equal playing field could be erased, this is good news. For female athletes at the high school and college level, insist on your rights under Title IX. Any school that defies federal civil rights law by denying women equal opportunities in athletic programs or forcing women to compete against transgender athletes who are biologically male stands to lose.

The battle to save women’s sports is not over, but the resolution in CWA’s case against Franklin Pierce University is welcome news. It dignifies the importance of our work to protect female status, fairness, and safety in sports designated for women and girls.

Both the U.S. House and U.S. Senate have legislation pending to protect female athletes that would further our cause. The Protection of Women and Girls in Sports Act of 2020 would specifically require in federal law that sex-specific sports for women and girls under Title IX be restricted to females based on biological sex. Please contact your members of Congress and ask them to support this legislation today.