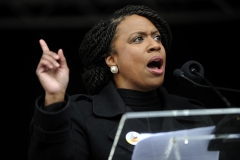 Should public transit be free? Massachusetts representative Ayanna Pressley thinks so. Her Freedom to Move Act offers $5 billion in grants to entice the nation’s transit systems to go fare-free. To qualify for grants, transit agencies would also have to improve safety and quality, particularly in low-income and historically underserved communities. Unfortunately, experience shows that these two goals aren’t always compatible.

A side effect of getting rid of fares is eliminating fare enforcement, which advocates say disproportionally targets black and other minority riders. Thus, the progressives backing Pressley’s bill (and the companion bill introduced by Massachusetts Senator Edward Markey) view fare-free transit as part of a larger social-justice agenda.

At least one transit manager is on board with a fare-free future. Phil Washington, CEO of the Los Angeles Metropolitan Transportation Authority, believes that his agency has a “moral obligation” to help the county and region recover from the “once-in-a-lifetime pandemic” and from the “devastating effects of the lack of affordability in the region.” Despite the Los Angeles MTA’s facing an estimated $1.8 billion deficit by mid-2021, Washington has directed a Fareless System Initiative (FSI) task force to examine not only the cost of going fare free but also how it would affect homeless riders and racial disparities in fare-evasion enforcement. Ironically, L.A. Metro already has some experience in relaxing fare enforcement, having discontinued an honor system in 1993 because few riders paid their fares.

New York MTA chairman and CEO Patrick J. Foye has resisted calls to go fare free, but Brooklyn councilmember Mark Treyger is pushing the idea, arguing in early 2020 that the loss of fares due to COVID-19 was “a real opportunity to reimagine mass transit,” including taking a “big bite out of poverty, mass incarceration, income inequality, and our impact on climate change.” Introducing a non-binding city council resolution calling for fare elimination, he also criticized fare enforcement for its disparate impact on the poor and especially minorities.

In Boston, Michelle Wu, a councilor-at-large who is running for mayor, is urging the Massachusetts Bay Transportation Authority (MBTA—or the T) to “free the 'T.'” Claiming mobility as a right, she sees fare-free travel as lessening income inequality and racial disparities, while addressing climate change through reduced traffic congestion. For now, her focus is on buses because, she says, they primarily serve minority communities and low-income residents. Senator Markey and Representative Pressley support her efforts. Wu is also likely to receive support from new Labor Secretary Marty Walsh, who, as mayor of Boston, agreed philosophically with Wu’s demands but worried about the T’s $424 million projected deficit by 2024.

In Philadelphia, activists are challenging the Southeastern Pennsylvania Regional Transportation Authority (SEPTA) “to prioritize the needs of people of color, essential workers,” and those “significantly, economically hurt by the pandemic.” Those calling for SEPTA to integrate regional rail service with the city’s bus and trolley network into a flat-fare structure allege that the separation is “grounded in racism.”

Advocates for fare elimination point to some smaller cities that have eliminated fares. These include a Zero Fare Program in Kansas City, Mo., that receives funds from the local transit authority and Blue Cross and Blue Shield of Kansas City; a free-bus experiment in Olympia, Wash.; and pilot programs in Lawrence and Worchester, Mass. In 2012, the Transportation Research Board found fewer than 50 communities offering free transit, mostly in resort or university towns, where riders were mostly tourists or students.

Several cities have had less success with their programs. Denver discontinued a test program after a year despite increases in non-rush-hour ridership, as did Trenton, New Jersey; in 1990, Austin scrapped free rides after the system began to attract joy-riding youths, drunken adults, and homeless riders.

Though $5 billion in federal aid won’t make much of a dent in the $39.3 billion shortfall that the American Public Transportation Association claims the industry faces between now and 2023, it could tempt some transit agencies seeking to offset huge ridership declines and to prevent additional layoffs.

Going fare-free to accept the federal money would be a mistake, however. According to a 2002 report by the University of South Florida’s Center for Urban Transportation Research, transit managers opposed eliminating fares, claiming that riders place a higher priority on issues like safety, travel time, and service frequency and reliability than they do on fare prices. Large bus and rail systems already face serious problems with crime and disorder, including an increase in assaults on transit workers and riders, as well as regular reports by transit employees of encountering drunks, drug users, and half-naked people. Eliminating fares and opening up the system wider would only make the transit systems’ security problems worse, driving even more riders away.

Sure, minority groups and riders of limited financial means might see some initial benefits from free travel and reduced fare enforcement—but aren’t they also entitled to protection from criminals and the chronically homeless or mentally ill increasingly terrorizing urban transit systems? And even if fare recovery is unimportant to the advocates, where is their concern for the safety and security of their constituents?

Dorothy Moses Schulz is an emerita professor at John Jay College of Criminal Justice, CUNY, and a retired captain at MTA-Metro North Railroad Police who has served transit agencies nationwide as a safety and security consultant.