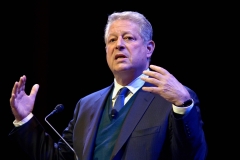 Understanding global warming ultimately gets down to understanding thermodynamics—the physics of what heat is and how heat flows.

We now observe in considerable detail that temperature, heat, and thermal radiation result from oscillation of all the bonds holding atoms and molecules of matter together. These bonds are not rigid. They are observed to oscillate back and forth at very high frequencies measured in trillions of cycles per second that we perceive as temperature.

But thermodynamics, as currently being taught in school at all levels, is based on ideas developed long before scientists understood what atoms are and how atoms are bonded together into molecules. Our current understanding of thermodynamics works reasonably well for engineering applications involving small differences in temperature, but fails catastrophically for climate studies where Sun’s temperature is 10,000 degrees Fahrenheit while Earth’s temperature averages only 59 degrees.

Currently, heat is defined as an amount of thermal energy in transfer. The greater the amount of heat you absorb, the hotter you become. It seems to make sense, but it sidesteps the issue of what heat actually is physically and how heat actually flows.

In 1900, Max Planck, one of the fathers of modern physics, was able to derive an equation by trial and error that calculates the observed amplitude of oscillation for each frequency of oscillation as a function of temperature of the radiating body. This equation, based on extensive measurements in the laboratory, became known as Planck’s empirical law.

Greenhouse-warming theory is based on the concept of adding amounts of heat together and the idea that the less heat emitted to space, the warmer Earth must get. But heat is not additive. It makes no physical sense to add amounts of heat together. Heat is a very broad spectrum of frequencies of oscillation whose amplitudes of oscillation travel by averaging, not by adding.

We often hear that 97 percent of all publishing climate scientists agree that Earth is being warmed by increasing emissions of carbon dioxide and other greenhouse gases. But this consensus says nothing about physics. Climate scientists simply have not studied the physics of global warming since Knut Ångström showed in 1900 that there were problems. Physics shows clearly that heat simply cannot flow in the manner assumed by greenhouse-warming theory. Greenhouse gases cannot physically be the cause of global warming.

What appears to cause both global cooling and global warming is explained in detail in videos, a book, and text at WhyClimateChanges.com.

Dr. Peter Langdon Ward earned a PhD at Columbia University and worked 27 years at the United States Geological Survey as a geophysicist and group leader. He has worked full time in retirement, at his own expense, since 2006, carefully reexamining all the evidence and theories for why climate has changed throughout Earth history.