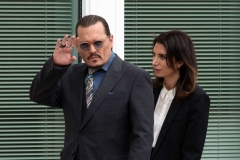 The Centers for Disease Control reports that men are more likely than women to be victims of domestic violence. Each year, 4.2 million males suffer from domestic violence, compared to only 3.5 million women. But male victims of abuse are routinely subjected to ridicule and neglect.

In light of these facts, were you surprised by the hyperbole of left-wing commentators about the Depp-Heard trial? These are several of the biased headlines that followed Wednesday’s announcement of the verdict:

Taylor Lorenz of the Washington Post asserted, “Depp’s core claim – women advance their careers by accusing powerful men of abuse – doesn’t even hold up to the evidence.” Of course, Depp never alleged anything of the sort. (It was WaPo’s 2018 defamatory editorial that was the basis of Depp’s $50 million lawsuit, but the irony apparently was lost on Lorenz.)

Examples abound of other looney statements by leftist commentators. So who in their right mind could make such claims?

In 2021, the Pew Research Center reported that young, left-wing white women were the demographic most likely to be diagnosed with mental illness. Pew revealed that an astonishing 56% of these persons had been told by a health professional that they suffered from depression, anxiety, or worse. And such persons are the group most likely to identify themselves as “feminist.”

In response, Evie magazine asked, “Does this mean there's a correlation between progressive ideas and mental health?”

Feminist dogma holds that society is rooted in the patriarchal oppression of women. Consistent with this ideology, Heard’s ill-fated WaPo editorial asserted the existence of the mythical “powerful man.” And summing up the 6-week trial, Heard insisted that Depp is a “a very powerful man and people love currying favor for powerful men.”

But Amber Heard apparently didn’t believe her own rhetoric. After one of her many abusive episodes, Heard taunted Depp by saying, “Tell them, ‘I, Johnny Depp, a man, I’m a victim too, of domestic violence’…and see if people believe or side with you.”

Apparently, powerful men have trouble being taken seriously when they report being a victim of a crime.

So let’s return to the question posed by Evie: Why does progressive gender ideology appear to incline women to mental illness?

Many forms of mental illness are the result of a cognitive disorder -- in other words, distorted thoughts about oneself and the surrounding world.

But feminists do not believe there is such a thing as “objective truth.” One writer revealed the women’s studies courses she had taken “led into an absurd intellectual alcove where objective truth is subordinate to academic theories used as political propaganda.” And one feminist treatise referred to science as a “masculine disorder.”

So imagine abandoning one’s rational faculties, and instead going through life subject to the whims of your feelings -- as well as a series of vacuous slogans such as “gender equality,” “women rule,” and “the future is female.”

During the trial, Heard’s inability to speak truthfully was apparent. Even though she had promised to pay the ACLU $3.5 million to ghost-write her Washington Post editorial, she only ended up paying $1.3 million. But under direct questioning by Depp’s attorney, Heard repeatedly insisted that she had contributed the full $3.5 million.

After the jury verdict was announced, Heard’s attorney insisted that Depp prevailed because of his advantages of “power, wealth, and fame.”

That comment conveniently ignored the fact that after publication of the WaPo editorial, Depp’s career came to a screeching halt, while Heard’s fame in "Aquaman 2" surged ahead. And let’s not forget to mention that the judge, two members of the jury, both lead attorneys, and many members of the media covering the trial were all female.

So the lawyer’s remark was not a mere cognitive distortion. It was a delusional rant that merits psychiatric attention.

Recently, Netflix executives sent a tart message to their employees, essentially demanding that they become less woke. If not, the memo warned, “Netflix may not be the best place for you.”

The same should be said to leftist women who claim to be advocates for domestic violence victims: If you can’t write honestly and fairly about male victims, then journalism may not be the best place for you.