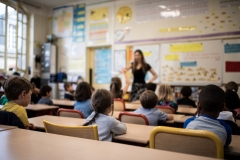 Title IX is the federal law designed to end sex discrimination in schools. Unfortunately, a decade ago, leftists began their long march to politicize and weaponize Title IX, expanding its focus during the Obama Administration to include sexual misconduct. And now we’re seeing Title IX being harnessed for the purpose of promoting a radical transgender agenda.

The most recent example comes from Wisconsin….

Bradon Rabidoux, 13, was leading a fairly normal eighth grader life at Three Kiel Middle School in Wisconsin. Until one day a classmate, previously known as a “she,” demanded that Bradon’s friend refer to her with a gender-neutral pronoun. (Presumably, “it” did not qualify as sufficiently gender-neutral.)

Bradon rallied to the defense of his male friend with this retort: “He doesn't have to use proper pronouns, it's his constitutional right to not use [them], you can't make him say things.'' Bradon was correct. The Constitutional protection of free speech means a person cannot be coerced to utter certain words or phrases.

But the Title IX policy stated the school “prohibits all forms of bullying and harassment in accordance with all laws, including Title IX.” The policy went on to say the school will “continue to support ALL students regardless of sex (including transgender status, change of sex or gender identity).”

So the school slapped Bradon with a Title IX complaint, accusing him of the nefarious practice of “mispronouning.” Yes, that’s how it’s really spelled.

Now, the Wisconsin Institute for Law and Liberty has come to Bradon’s defense, saying the charge is “totally inappropriate” and accusing the school of engaging in an “extreme abuse of the Title IX process.”

So what the heck is going on?

Speech control and thought control are essential strategies of every totalitarian movement. Such groups require an acquiescent and willing population in order to pursue the movement’s quest to expand and consolidate political power.

For decades, totalitarians have flirted with the notion of speech control. As early as 1965, neo-Marxist Herbert Marcuse advocated that societies should refuse to tolerate “intolerant” speech. This philosophy eventually blossomed into a full-blown campus movement. First Amendment attorney Greg Lukianoff explains,

"In the early 2000s, alongside overbroad conceptions of 'harassment,' terms like 'implicit bias,' 'microaggression,' and 'trigger warning' were used to label merely insensitive speech as dangerous and traumatizing. Students who grew up in the digital age began to bring the tactics of Internet activism into classrooms, shouting down 'offensive' speech and calling for bans on 'toxic' ideas. These calls were answered by administrators, some of whom were eager to institute a new wave of repressive policies to appease the most vocal critics of open expression."

And now, the Biden Administration is planning to take things a step further, proposing to blow up Title IX’s long-standing definition of “sex” to include “sex stereotypes, sex-related characteristics (including intersex traits), pregnancy or related conditions, sexual orientation, and gender identity.”

“Gender identity” may be the most problematic part of that definition. Reportedly, there are 72 genders to choose from. Entire websites are devoted to outlining the alphabet soup of possibilities: androgynous, stemme, asexual, bisexual, butch, cisgender, femme, genderqueer, gender nonconforming, intersex, questioning, and many more.

Once ill-defined “gender identity” becomes protected by a federal non-discrimination law, the far-reaching effects on parental rights and women’s sports cannot be overstated:

Activist school counselors may blame bouts of depression on “gender dysphoria,” which is defined as “clinically significant distress or impairment related to a strong desire to be of another gender.” Hormonal treatments may be instituted without parental knowledge or consent. Parents who refuse to "affirm" transgender ideology may find their children physically removed from the household. This is exactly what happened to California teenager Abby Martinez, eventually leading to her tragic suicide.

The effects on women’s sports will be similarly transformational. Transgenders enjoy numerous physical advantages over biological females. This contradicts the whole purpose of Title IX, which is to assure fairness for all students regardless of sex. Which is why last week, the World Swimming Coaches Association released a statement opposing the involvement of transgenders in women’s swimming events. Numerous states have enacted laws to ban restrict transgender participation in female sports.

No surprise, 88 organizations have come out in opposition to the Biden plan. These groups include 15 Attorneys General offices, 9 leading Title IX law firms, 26 organizations in a Title IX Coalition, 27 parental rights groups, and 11 other organizations.

The controversial Biden Title IX proposal has become a debating point in the November elections. In a Newsweek editorial, Ronna McDaniel, chair of the Republican National Committee, boldly proclaimed, “The days of ceding cultural issues to the Left are over. Democrats will feel it come November.”

Hopefully Mr. Biden will take the hint and bring a merciful end to his ill-conceived Title IX proposal.

Edward E. Bartlett, Ph.D. is a former university professor and worked for the Department of Health and Human Services for 17 years.