What is the point of having Christian universities if they can’t have Christian beliefs? 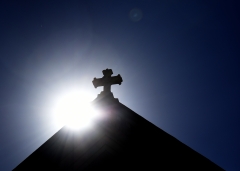 Conservative Christian colleges are constantly threatened with petitions and lawsuits to abandon the basic principles of their faith. As a student who chose to attend a Christian university to be around like-minded people, this is deeply troubling.

As Campus Reform reported last month, a group of staff and students at Seattle Pacific University filed a lawsuit against the school for refusing to change a hiring policy that excluded those who engaged in sexual behaviors inconsistent with their principles.

Attorney General Bob Ferguson and his office are currently investigating SPU’s hiring policies to see if they are protected by the First Amendment.

The lawsuit would require that six men from the SPU board of Trustees be removed from their positions.

It is important to recognize that Seattle Pacific University is an openly Christian school. According to their statement of faith, SPU seeks to “[g]round everything [they] do on the transforming gospel of Jesus Christ.”

Naturally, the word “everything” would encompass who they hire.

When asked for comment, the university replied that they are "fighting to protect [their] freedom, as a religious university, to have religious standards in hiring. The Attorney General is trying to take away that right, not just from Seattle Pacific, but from many different faith groups who are protected by law."

Seattle Pacific University has a mission to spread the gospel. It is only right that they choose faculty that are willing to advance that mission, both in what they affirm and in how they live.

Both students and faculty at PCU knew initially that the university was Christian. If they had a problem with biblical sexuality, then they were free to attend, or work at, a different university.

There are many students, such as myself and others attending The Master’s University, who want Christian schools that actually uphold Christian values, including biblical marriage.

If Christian universities continue to be pressured into forsaking Christian principles, there will soon be no other options for students like myself who want a Christian education.