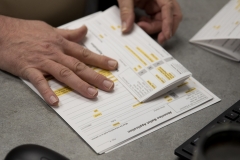 The first voters in this year’s presidential elections will be able to engage the absentee ballot process in North Carolina on Sept. 4.

On Sept. 29, more than three weeks after the voting starts for the 2020 presidential election, President Trump is scheduled to face off with presumptive Democrat nominee Joe Biden for the first of three debates.

By that first debate, when the president will likely have something to say about his opponent’s abortion extremism, 8 million people in 16 states may have already cast their vote – without having heard Biden’s plan to have taxpayers foot the bill for abortion, to have healthcare professionals forced to take part in the procedure even if they have religious or moral objections, and to ensure that abortion is legal through all nine months of pregnancy from sea to shining sea.

In a letter to the Commission on Presidential Debates, the Trump campaign, which provided the aforementioned estimates, asked to have a fourth debate added to the schedule to take place in the first week of September. Failing that, the campaign asked if the final debate could be moved up to early September.

The Commission denied the request, but said it would reconsider if the Biden campaign agreed. Since this change would benefit both candidates, I can’t see why Biden would be against it. The ball is now in his court.

This campaign has been unlike any other in our modern history, thanks to the China virus pandemic, so there’s much about it that doesn’t seem to make sense. But to have people voting before they have had a chance to hear the candidates debate each other borders on the absurd. As the Trump campaign said in its letter to the debate commission, the current schedule is an "outdated dinosaur and not reflective of voting realities in 2020.”

The most obvious reality the debate schedule overlooks is the fact that early voting has surged dramatically! In 1980, when Ronald Reagan defeated Jimmy Carter, only 5 percent of the electorate had voted prior to Election Day. But by 2016, an incredible 41 percent cast their ballots before Election Day.

This year, with so many people concerned about crowds, the number of early voters is sure to skyrocket and is likely to be more than half the voters.

Having a debate earlier makes the most sense, because at least most voters will have a chance to hear the candidates side by side. That helps everyone. Voters are entitled to have the most information to make an informed choice on something as consequential as who gets to lead the United States for the next four years.

I have always been a proponent of early voting, which had its start at the beginning of our nation’s history. People who had to travel long distances to get to polling centers were given more than one day to do so, especially to accommodate difficult weather.

In 1845, Congress passed a law calling for Election Day to take place annually on the first Tuesday following the first Monday of November. One of the motives was to prevent people from voting more than once.

During the Civil War, members of the military who could not get home to vote would have family members vote by proxy, and more provisions began to be made for the military to send in absentee ballots directly to the election centers.

As time went on, the ability to use absentee ballots was granted also to civilians, when reasons of travel or illness prevented them from showing up at their polling place on Election Day.

A more modern option is "no-excuse" early voting. In other words, a voter can vote before Election Day for any reason at all. In 1980, the state of California pioneered this process by letting voters cast mail-in ballots early, even if they would have been able to vote on Election Day. Now a majority of states offer early voting.

But as important as it is to cast a ballot early, it makes no sense to have undecided voters choosing a president until they have as much information about the candidates as possible, including how well they can think on their feet.

In his book "Political Learning from Presidential Debates," political science professor Thomas Holbrook wrote, “the evidence overwhelmingly indicates that the most important debate, at least in terms of information acquisition, is the first debate….The first debate is held at a time when voters have less information at their disposal and a larger share of voters are likely to be undecided.”

To have that first debate take place after early voting begins makes no sense. Americans – and their presidential candidates -- deserve better.

Father Frank Pavone is the national director of Priests for Life.