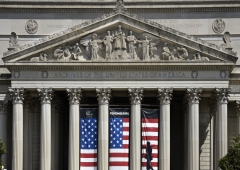 The federal agency responsible for making government records available to the public has gone dark with both Congress and the media when it comes to the classified documents stored at the Penn Biden Center, and at the homes of President Joe Biden.

The National Archives and Records Administration declined to answer whether anyone told the agency not to notify the public or Congress about the classified documents that were found to have been stored at the Penn Biden Center before the 2022 midterm elections in November.

In 2022, the National Archives issued 10 separate statements from January to December regarding documents it has not received from former President Donald Trump.

The National Archives’ “no comment” came in response to a Daily Signal inquiry Tuesday, which asked:

1) Did NARA retrieve the classified records from the Penn Biden Center in Washington, D.C.?

2) Why didn’t NARA notify the public or Congress that they took possession of classified records tied to Joe Biden prior to the 2022 midterms?

3) Did anyone tell NARA not to notify the public or Congress?

4) Will NARA comply with all lawful FOIA requests pertaining to this matter? Will responsiveness to FOIA requests be hampered by the fact that this matter is under investigation by a special counsel?

The National Archives says its mission is to “drive openness, cultivate public participation, and strengthen our nation’s democracy through equitable public access to high-value government records.”

“DOJ has advised it will need to consult with the newly appointed Office of Special Counsel (SCO) in DOJ to assess whether information can be released without interfering with the SCO’s investigation,” the letter says. It later adds, “NARA receives only the Presidential and Vice Presidential records that the departing administration provides us; we are never able to know whether we have ‘all’ such records.”

An oversight committee spokesperson told The Daily Signal that the chairman’s deadline of Jan. 24 for documents stands and “we anticipate moving forward with interviews with NARA officials.”

After the raid on Trump’s home in Florida, the National Archives issued a statement in September asserting that it was not aware of missing documents from the Obama administration.

“This is false,” the agency said of charges Obama had missing documents. “NARA has never issued any such statement and is not aware of any missing boxes of Presidential records from the Obama administration.”

Courtesy of the Daily Signal.