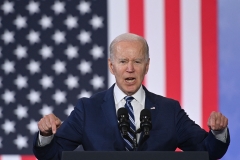 There's been a lot of talk in the news lately about chemical weapons. The Biden Administration warned that Russia might use them in Ukraine, and President Biden even suggested that NATO might even use them against Russia. That's a disturbing thought to be sure.

But here's the real scandal in my view: Chemical weapons are being used in an undeclared war against Americans right here in the United States.

Drug Enforcement Administration chief Anne Milgram made a shocking statement recently that did not get nearly the attention it deserves. During an interview with ABC News, Milgram said:

"What we know is that China is providing chemicals to Mexico, to the criminal drug networks that are then mass-producing these fake prescription pills....But there's no Xanax, no Oxy, no Percocet in them. They're fentanyl...."

Drug overdoses, driven by fentanyl, are killing more than 100,000 Americans a year. And the amount of fentanyl that is coming into the United States has quadrupled since Joe Biden took office because of his open borders policies.

But let's be absolutely clear about what Milgram said – communist China is sending the chemicals to the cartels to make fentanyl. This is not the usual process where drug dealers want to hook people so they are regular customers. Fentanyl is deadly.

Just imagine if terrorists or another enemy of the United States ever found a way to weaponize fentanyl. Or have they?

Are the communist Chinese working with drug cartels, as the DEA chief suggests, to deliberately kill as many Americans as possible?

I think it's a question that deserves serious examination – especially since Joe Biden refuses to secure our borders or even do the bare minimum to prevent hundreds of thousands of illegal aliens from crossing our border EVERY MONTH.

More than two million illegal aliens crossed the southern border in Joe Biden's first year in office. That's more than 160,000 illegal aliens every month. And it's only going to get worse.

The Biden Administration has announced that it is planning to end enforcement of Title 42, a public health emergency order that allows the government to immediately deport illegal aliens caught at the border. (Most Americans probably assume that is just standard operating procedure, but it isn't.)

According to various reports, the administration is preparing for a flood of migrants when it ends Title 42 enforcement, as many as 18,000 a day or more than 500,000 a month!

Border security is national security. But our border is clearly not secure. This massive flood of humanity across our southern border is aiding and abetting the drug cartels as they smuggle communist China's deadly fentanyl into America. (And I'm not even addressing the numbers of criminal illegal aliens coming across the border wreaking havoc in communities across the country.)

The drug cartels should immediately be put on the list of terrorist organizations, and the border must be secured. NOW!

While we are understandably focused on the horrors in Ukraine, we are ignoring the horrors taking place daily in Los Angeles, Las Vegas, Chicago, San Antonio, Columbus, Cincinnati, Manchester, Boston, etc., where our children are dying at the hands of the communist Chinese, the drug cartels, and the open borders lobby!

There's nothing in that oath about providing free health care, forgiving student loan debts, or finding solutions to climate change. A president must simply enforce our laws and protect the country and the Constitution.

Joe Biden is not faithfully carrying out his duties by ignoring our immigration laws.

Joe Biden is not protecting the Constitution of the United States by allowing our southern border to be erased.

Joe Biden is not defending the American people by allowing communist China to conspire with drug cartels to poison us with fentanyl.

If President Biden refuses to enforce our immigration laws and protect the American people, he must be impeached!