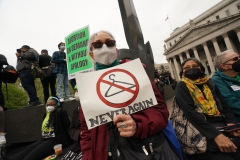 People protest in reaction to the leak of the Supreme Court draft abortion ruling on May 3, 2022 in New York. (Photo credit: BRYAN R. SMITH/AFP via Getty Images)

With his nominations of Neil Gorsuch, Brett Kavanaugh, and Amy Coney Barrett, Donald Trump accomplished what Presidents Ronald Reagan and George W. Bush desperately hoped for but could not achieve – a real conservative majority on the Supreme Court.

According to a leaked draft opinion by pro-life stalwart Justice Samuel Alito, that Trump majority appears ready to overturn Roe v. Wade, the 1973 decision that legalized abortion-on-demand in America. Conservatives and leftists are alternately excited and enraged by that prospect.

But when Roe goes to the ash heap of history, as is expected any day now, it is critical that we separate fact from fiction.

FACT: There is no constitutional right to abortion. It's just not there.

There is a right to free speech, a right to religious liberty, a right to own a firearm. But there is no right anywhere in the Constitution to kill a preborn baby. Even leftists icon Ruth Bader Ginsburg recognized that Roe v. Wade was bad law and bad precedent.

While some polling suggests Americans don't want Roe v. Wade struck down, pollsters usually don't help respondents understand the extent of the decision or why Ginsburg felt it was too radical in some ways. Pro-abortion advocates are more than happy to keep the public in the dark.

FACT: There is no pro-abortion majority in America. In fact, it's the opposite.

Large majorities of Americans want abortion restricted. For example, only 17% of Americans support abortion on demand at any point in pregnancy, and 71% would ban abortions after the first trimester (after 12 weeks). In other words, the more people understand what Roe permits, the less they like it.

FICTION: If Roe is overturned, all abortions will be illegal, forcing women into dangerous, back-alley procedures.

That is the extreme argument of the shrill left. But the truth is far less dramatic, not to mention more democratic. When Roe is overturned, the people and their elected representatives in the states will be free to decide the issue.

Ultimately, Roe's survival should be determined by its constitutional merits, which is where the decision really fails. Many left-wing legal scholars have criticized Roe v. Wade as "arbitrary," "faintly ridiculous," "bordering on the indefensible," and "constitutional origami."

FACT: The battle is far from over.

There's virtually nothing more important to the modern Democrat Party than the ability to destroy innocent life. Joe Biden wants Roe codified into federal law. He wants every American to subsidize abortion with their hard-earned tax dollars.

And the pro-life movement certainly isn't going away. It's been going strong for nearly 50 years now, and the momentum is on the side of life.

When Roe v. Wade was incorrectly decided, Justice Harry Blackmum dodged the central issue, declaring, "We need not resolve the difficult question of when life begins." It's easier to talk about "privacy" and "choice."

In the years since 1973, medical science has made tremendous advances. Modern ultrasounds have given us a window into the womb. We can see the beating heart and the full humanity of the preborn child.

I believe the Constitution contains a right to life, specifically in the 14th Amendment. Our Declaration of Independence certainly recognized the "unalienable right to life."

Like terrible precedents of the past, Roe deserves to go. It is based on the same flawed premise of Dred Scott – that some people have no rights we are obligated to respect, that some people are "property" to be disposed of at whim, whether sold on an auction block or discarded like a Styrofoam cup.

America is better than that. We fought a terrible Civil War to end the inhumanity of slavery. Reverend Martin Luther King, Jr. called on us to fulfill the promise of America, to guarantee full civil rights to all.

We're still fighting to end the inhumanity of abortion. Overturning Roe v. Wade is an important first step in guaranteeing the sanctity of life and once again fulfilling the promise of America by creating a society in which every child is protected under the law and welcomed into the world.