A Linguistic Road to Serfdom 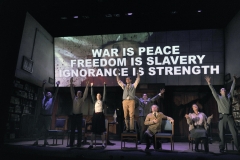 What do most totalitarian regimes in history and around the world generally have in common? That is, other than human suffering and death, of course. If one looks closely at the way in which they create their image, these regimes have a very specific language in common. It is a language of redefinitions. It is one forced out of its natural habitat and development and then brought to the front lines to serve a regime’s ideological purpose as part of the war on freedom.

A few examples include Romanian dictator Nicolae Ceausescu’s name for his palatial state ministries’ headquarters, The House of the People (more honestly renamed in times of democracy the Palace of Parliament), and Chairman Mao’s Great Leap Forward, which was nothing more than economic disaster, famine and death.

This is also reflected in the name of the country the chairman himself founded, The People’s Republic of China. A look at Mao’s policies, as well as its current problems such as forced abortions, Covid lockdowns, and  religious persecutions, reveal that China belongs to anyone but its own people.

Many other examples of ideological linguistic rebranding abound. So why is this important?

Because the people of a free country need to be awake and aware of when such manipulative tendencies spring up. And today’s America is a place where linguistic machinations are a tragically regular occurrence.

The most recent example, albeit not as obvious, and therefore easily missed, comes from the White House. It was not a name rebranding this time, but rather a soft language of political shrewdness. It is a language pointing toward a future of uncertainty.

The White House made a comment two weeks ago in regard to China’s now eased zero Covid policy. Senator Ted Cruz called it “pure weakness” as it did not condemn the authoritarian regime’s abuses of its own people.

However, weakness might not be the correct characterization here. As we have seen repeatedly, actions from both the government and private companies in the U.S. are perhaps more easily described as complicit with the authoritarian system rather than weak. And, in that case, the comment is not pitiful either, as Senator Cruz described it. Rather, it is dangerous.

One understands that it is not possible to stop trading with a country every time human rights are violated around the world, without consequences to the domestic economy, and hence, the American people. But this is not what is being discussed here.

This is a statement from the White House. We are not talking about a complete overhaul of economic and trade relations with China—what an idea that might be— we are talking about the message sent not just to the world but to the U.S. citizens, in terms of what type of ruling power the White House is representing.

The “we are not pursuing this policy here,”  in other words “you do what’s best for you” verbiage does nothing for the credibility of this administration, which is supposed to represent the right way to govern, by and for the people. Whether the current White House agrees with that or not, most Americans want to keep their freedom and would not want to see it sabotaged.

“Everyone has the right to peaceful protests everywhere in the world including the PRC.” This statement is neutral and unimpassioned, indeed the work of a politically minded individual. Some might agree with this approach.

The problem is that it is discussing a country that has taken control of its citizens to such a degree that they are living in camps, starving and losing their lives. This on top of the constant human rights violations it has imposed on its people, from religious oppression, unwanted surveillance and censorship, to forced abortions.

Such atrocities bring to mind the question of why companies would want to do business in these environments. Then again, profit and the CEOs likely reminding themselves that perhaps the people with which they are doing business are not the ones perpetrating these atrocities probably gives enough reasons.

That does not excuse their complicity with the system though, as in the case of Apple and their airdrop cessation, to the detriment of the Chinese people.

While a private company is free to engage commercially with whomever it wants, it is also subject to the will of the consumers to a great extent, as there can be no company without them. So it is up to the consumer to give Apple a reality check.

As for the White House, it is supposed to represent the American people, their country and values. It is not supposed to show its mastery of ignoratio elenchi or flex its spin doctor muscles while people are dying. It is not meant to support or show sympathy toward a totalitarian regime. Otherwise, what are the US citizens to understand from this?

If their own government is lenient or understanding toward a totalitarian regime, what promise is that for their future? What direction is their government taking? Should the White House not reflect true American values and stop this semantic circus encouraging authoritarian governments?

That is not to say that countries should threaten one another. But good actions should be praised and bad actions should be firmly condemned. When there is a clear moral compass, such a statement is not complicated nor is it controversial.

Words have meaning and they have consequences. So it is important that language is not manipulated for political causes. Of course, it is not likely for such manipulation attempts to cease. But the more the American people pay attention the better the chance those in power will reflect a semblance of good sense.

Protesters in China and people suffering all over the world under dictatorial rules were likely never presented with a clear and strong opportunity to stand guard at the gate of freedom by keeping an eye on their leaders. And so they slipped, or were thrown, into despotism. Times were more trying when such regimes took over their victim countries, and it took more effort to keep a close watch on political intentions.

But here, in the U.S., we have the time, the opportunity, the comfort and the means to be the guardians of our own freedom. And it starts by policing those who would police language and by loosening the tongues of those who would not speak the truths needed to be spoken.