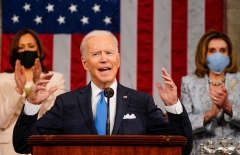 Deroy Murdock, a columnist and black conservative activist, says that "President Joe Biden’s Build Back Better Act should be rechristened the Build Bigotry Better Act. And then it should be buried in a shallow grave on Capitol Hill."

This "tax-and spendathon, currently pushed by Biden and top congressional Democrats, reputedly would devour $3.2 trillion. As if! Once stripped of accounting gimmicks...this leviathan’s true, 10-year cost totals $5.9 trillion. That equals $41,172 for each of America’s 143.3 million taxpayers," he says. "But this extravaganza’s eye-popping tab is just one of its fatal flaws....Atop $2.3 trillion in tax increases....BBBA is a lavish slush fund for critical race theorists."

It awards grants based on racial considerations, rather than merit, to school systems and electric-vehicle charging programs. It earmarks "tuition assistance" to institutions serving particular races, effectively reinforcing segregation. It authorizes $1 billion, in part to employ "faculty from racial and ethnic groups who are underrepresented among the medical and other health professions." It provides "$175 million for maternal-health facilities that display 'racial and ethnic disparities,' even if unrelated to racism."

Under it, "employers must provide, 'to the extent available,' information on the races, sexes, sexual orientations, gender identities, and other characteristics of paid-leave beneficiaries." Murdock says it "will dispatch countless federal ethnocrats to decide who is white, black, or otherwise and then deny or disburse billions of taxpayer dollars due to applicants’ complexions."

On Twitter, President Biden claimed that “My Build Back Better Agenda costs zero dollars….And it adds zero dollars to the national debt.”

But even liberal media admitted that this claim was false. “All the new spending and new tax cuts and credits in the bill add up to closer to $4.7 trillion over a decade,” reported the New York Times. It would increase the national debt, according to the Committee for a Responsible Federal Budget, by “as much as $4.3 trillion of more debt over the next decade.” While the White House gave his legislation a price tag of $3.5 trillion, it actually contained at least “$5.0 trillion to $5.5 trillion worth of policies.” Much of that would be paid for through increased budget deficits: Economists at the University of Pennsylvania’s Wharton School say it would increase taxes by $2.4 trillion, far less than its cost.

Hot Air says that the bill contains a “whole lotta pain” for taxpayers, as well as politically extreme provisions:

"Illegal aliens will be having a field day. Not only will they continue to be allowed to flood into the country largely unimpeded thanks to the Biden border crisis, but they will be immediately eligible for free college enrollment, student loans, and the child tax credit, effectively giving them a permanent guaranteed basic income….Keep one hand on your wallet because the bill imposes $2 trillion in tax hikes that will impact those making under $400,000 per year. Wait… didn’t Biden specifically promise that this wasn’t going to happen?"

Worse, it would take away thousands of dollars worth of tax credits from low-income people if they marry. As CNBC explains, those people could lose their earned-income tax credits if they marry: "a childless worker marrying someone with a kid may eliminate the benefit. It may also reduce what their spouse with a child would have received if they were single." The Republican Study Committee complains that the bill “penalizes marriage: The bill would permanently double the EITC’s marriage penalty on childless worker benefits.”

The Republican Study Committee also argues that the Build Back Better Act will cost thousands of Americans their jobs in sectors such as energy and daycare, while subjecting small businesses to crippling fines. “The bill blocks the ability of many faith-based providers from participating in the childcare system and will lead to many of their closures.” It “requires pre–K staff to have a college degree.” It is biased in favor of left-wing unions, “subjecting employers to penalties that exempt union bosses and officials.” It “drives up costs on Americans’ utility bills” and imposes “a tax on natural gas up to $1,500 per ton that could cost the American economy up to $9.1 billion and cost 90,000 Americans their jobs.” It “grants amnesty for millions of illegal immigrants” and grants them “welfare and other entitlements.”

By driving up the national debt to dangerous levels, the Build Back Better Act would shrink the size of our economy.

“The existence of the debt saps the rest of the economy,” says the University of Pennsylvania’s Efraim Berkovich. “When the government is running budget deficits, the money that could have gone to productive investment is redirected.…You’re taking away from the capital that we need to grow our economy in the future.”

Past increases in spending by the Biden Administration backfired and shrank our economy by reducing employment. Economists had expected that the economy would add more than a million jobs in April 2021, because it had been growing rapidly since fall 2020. But after Congress passed Biden’s $1.9 trillion “American Rescue Plan” in early March, employment grew by far less than expected, resulting in 700,000 fewer jobs.