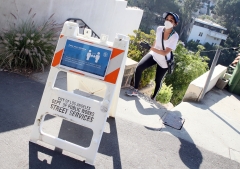 Federal health advisers are advocating that racial minorities be given access to a COVID-19 vaccine before whites. That would be unconstitutional, and would likely lead to court challenges.

A federal advisory committee is working on a ranking system for who will get the first doses of any effective coronavirus vaccine. And it may recommend that access be based on race, reports the New York Times. The reasoning is that:

"Black and Latino people have become infected with the virus at three times the rate of whites, and have died nearly twice as frequently. Many of them have jobs that keep them from working at home, rely on public transportation or live in cramped homes that increase their risk of exposure. They are more likely to suffer from underlying health problems, including diabetes and obesity, that raise the risk of hospitalization and death."

Rather than discriminating against whites, the government could give priority to all people, regardless of their race, who have specified health conditions, or work in the specific jobs that increase exposure to COVID-19.

Advocates of giving minorities priority disagree with that approach. Dayna Bowen Matthew, a member of the Advisory Committee on Immunization Practices, argues that it is "racial inequality — inequality in housing, inequality in employment, inequality in access to health care — that produced the underlying diseases....it’s that inequality that requires us to prioritize by race and ethnicity."

Court rulings do allow the federal government to use race to remedy the present effects of its own recent discrimination against minorities in the area in which it is using race.

But the federal government's own discrimination against minorities in healthcare has not been sufficiently recent, intentional, and systematic to justify a preference for minorities. The notorious Tuskegee experiment, for example, ended 48 years ago.

Most courts say that the government can use race-based affirmative action or other special treatment only to remedy intentional discrimination, not racially “disparate impact.” (See, e.g., Builders Association v. County of Cook (2001); People Who Care v. Rockford Board of Education (1997); Michigan Road Builders v. Milliken (1987)).

Also, widespread discrimination, not just a few individual instances of discrimination, has to be shown to justify using race, according to judges. (See, e.g., Middleton v. City of Flint (1996)).

Collectively, these requirements forbid giving minorities priority in access to the vaccine, especially on a national basis. What discrimination persists in healthcare is usually societal (rather than governmental), and intentional discrimination is the exception rather than the norm.

But these court rulings may not dissuade public health officials from recommending that access to a vaccine be limited based on race. The chairman of the Advisory Committee on Immunization Practices, Dr. José Romero, says that blacks and Hispanics "are groups that need to be moved to the forefront.” Another panel member, Professor Sharon Frey, agrees that "it’s very important that" those "groups get into a high tier."

In a New York Times letter to the editor, Dick Stoll suggests that the vaccine be made available based on a point system, under which "you are assigned a certain number of points if you are over 65, more points if you are Black or Latino....more if you have certain underlying conditions, more if you work in proximity to others....presumably Black and Latino people would be assigned a high number based on existing data. Under such a system, race would be relevant, but not determinative."

But even that would be unconstitutional. Even when it is permissible for the government to use race somewhat, assigning a high number of points based on race is generally illegal. In higher education, there is a special exception allowing race to be used to be used as a tie-breaker, as part of universities' "academic freedom." But the Supreme Court nevertheless declared a college admissions policy illegal, because it assigned blacks and Hispanics a substantial number of points based on their race. It concluded that the Constitution prohibits officials from using a policy in which race is the reason for awarding 20 percent of the minimum points required for admission (Gratz v. Bollinger (2003)).