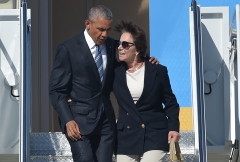 "Congressional Dems sent a letter to Comcast, Amazon, Google, ATT & others, demanding to know what they plan to do about the 'the spread of dangerous misinformation' from Fox News, OAN and Newsmax - including whether they will continue to carry them," notes Rachel Abrams of the New York Times.

Law professor Gus Hurwitz said, "These letters are chilling, in both the [First Amendment] sense and that of the feeling in my bones when I read them. Effectively demanding distributors impose government-mandated speech codes for content."

Congressional Democrats only object to misinformation on these conservative channels -- not progressive ones. As Reason Magazine's Robby Soave notes, "False claims do appear on conservative news channels, streaming services, and social media. But they also appear in The New York Times, on CNN, and in other mainstream information outlets." For example, the New York Times falsely accused a Republican politician of inciting a mass shooting in Arizona; promoted the Duke Lacrosse rape hoax; and made false claims about a Supreme Court pay-discrimination case.

So there is no justification for Congress to crack down on conservative media only. Such viewpoint discrimination violates the First Amendment, according to the Supreme Court. (See Iancu v. Brunetti (2019)).

Even unprotected speech usually cannot be restricted in a way that targets particular viewpoints, as the Supreme Court made clear in R.A.V. v.  St. Paul (1992).

More importantly, many kinds of "misinformation" are protected speech, which cannot be banned even in a non-discriminatory way. As Robby Soave notes,

As the words "misinformation" and "disinformation" come to refer not to just clear falsehoods but to information that is contentious, disputed, or highly partisan but nevertheless true, it is important to reject the idea that there is a "fake news" exception to the First Amendment. If a statement is libelous, then an outlet can be sued for printing it. If it contains a call to violence, platforms may have some legal responsibility to take action against it. But the First Amendment's protections are extremely robust, and the government may not criminalize the dissemination of information that is merely wrong or uninformed. Such a move would imperil not just right-wing news channels, but all speech that criticizes the government.

False factual claims in political campaigns are often protected by the First Amendment, as the Washington State Supreme Court ruled in striking down a law against lying in political campaigns, in Rickert v. State Public Disclosure Commission (2007). The First Amendment protects such speech because politicians and their allies will typically view speech critical of them as “false,” based on their own subjective, self-interested notions of what is “true” or “false.”

Like the Supreme Court said in Thomas v. Collins, in the realm of political debate “‘every person must be his own watchman for truth, because the forefathers did not trust any government to separate the truth from the false for us.’”

The letter sent by Congressional Democrats Anna Eshoo and Jerry McNerney does not explicitly threaten any particular penalties if their demands are not met -- but that doesn't mean it doesn't violate the First Amendment, because it is sent on official "Congress of the United States" letterhead, and is signed by each of them in their official capacity as "Member of Congress."

Government officials don't need to make explicit threats to violate the First Amendment. Veiled threats or subtle intimidation will do. For example, the federal appeals court in New York ruled that a city official’s letter urging a billboard company to stop displaying a church’s anti-homosexuality billboard potentially violated the First Amendment, since the letter cited his “official authority as ‘Borough President of Staten Island’" and thus could constitute an “implicit” threat, even though the official lacked direct regulatory authority over the billboard company and did not explicitly threaten any reprisals. (See Okwedy v. Molinari, 333 F.3d 339 (2d Cir. 2003)).

Similarly, it potentially violated the First Amendment when a village official wrote a letter to the Chamber of Commerce criticizing it for publishing a businessman's ad critical of village policies in the Chamber's publication. An appeals court ruled the letter could be interpreted as a veiled threat of boycott or reprisal (See Rattner v. Netburn, 930 F.2d 204 (2d Cir. 1991)).

Here, there is an implicit threat that if companies like Google and Amazon don't do what Congressional Democrats want -- and restrict conservative speech -- Congress will take away their protections under Section 230 of the Communications Decency Act -- as many Democrats, including Joe Biden, have already suggested doing. That threat could very well violate the First Amendment.

Companies often heed Congressional demands. Earlier, Democrats like Congresswoman Alexandria Ocasio-Cortez called on Apple and Google Play to take action against the conservative social-media web application Parler, which they did. Parler was falsely blamed by progressives for inciting the Capitol riot, but only 8 of 125 social media posts linked to the unrest in court documents were on Parler, compared to 73 on Facebook and 20 on Instagram.

In January, journalist Glenn Greenwald noted that progressives were celebrating the banning of conservatives as a sign that social media companies are doing the bidding of Congressional Democrats who oversee them. As he pointed out, Jennifer Palmieri, a "long-time close Clinton aide" and Democratic operative, was "explicitly *boasting* that" Facebook "and other Silicon Valley" companies "are now censoring conservatives because Dems are now in charge of Congress." On Twitter, Palmieri noted that "social media companies" took such action "the same day they learned Democrats would chair all the congressional committees that oversee them."