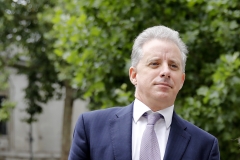 Would you try to justify an investigation by citing unreliable claims from a person who behaved in a "crazy" way? You might, if it involved an opposing political candidate.

That's how an FBI official sought to justify the government's surveillance of the Trump campaign in 2016. As Eric Felten reports at Real Clear Investigations:

“'Crazy' was the term the FBI agent used to describe the behavior of Christopher Steele, author of the now-debunked Trump-Russia dossier. 'I've seen crazy source-related stuff in 20 years in New York and this was one of the craziest,' the veteran agent testified to the Senate Select Committee on Intelligence.

Nevertheless, the FBI continued to rely on Steele’s allegations – that Donald Trump and his team were conspiring with Russians who possessed compromising information – to justify its surveillance of the Trump campaign. Without evidence to verify Steele’s claims, the FBI fell back on its assertion that the former British intelligence agent was reliable."

Recognizing the agent was right about Steele's unreliable behavior, FBI assistant director Bill Priestap removed Steele "from the list of official bureau sources on Nov. 17, 2016." But when the investigation of the Trump campaign was later questioned, "Priestap vouched for Steele’s reliability" to justify investigating Trump, "even though he later admitted to the Justice Department inspector general that he 'understood that the information [from Steele] could have been provided by the Russians as part of a disinformation campaign.'"

The dossier's underlying source was unreliable, too. As investigative reporter Paul Sperry notes, "the mysterious 'Primary Subsource' that Christopher Steele has long hidden behind to defend his discredited Trump-Russia dossier," Igor Danchenko, has "criminal convictions and other personal baggage ignored by the FBI in vetting him and the information he fed to Steele." Yet agents "continued to use the dossier as grounds to investigate President Trump and put his advisers under counter-espionage surveillance." Danchenko, "who was hired by Steele in 2016 to deploy a network of sources to dig up dirt on Trump" for "the Hillary Clinton campaign, was arrested, jailed, and convicted years earlier on multiple" charges and "ordered to undergo substance-abuse and mental-health counseling."

It would be nice to find out more about the investigation, and all the strange things that happened during and after it. But records related to it keep disappearing. The National Review reports:

"More than two dozen phones belonging to members of Special Counsel Robert Mueller’s team were wiped clean of data before the Justice Department’s inspector general could comb them for records...some reset to factory settings and some wiped 'accidentally'...including mobile phones that were 'reassigned,' the Special Counsel’s office wiped a total of 31 phones....

Additionally, the cell phone of FBI lawyer Lisa Page was misplaced by the special counsel’s office. While it was eventually obtained by the DOJ inspector general, by that point the phone had been restored to its factory settings, wiping it of all data. The phone of FBI agent Peter Strzok was also obtained by the inspector general’s office, which found 'no substantive texts, notes or reminders' on it.

Strzok and Page texted each other about their aversion to Donald Trump during the 2016 presidential election cycle. In their messages to each other, Strzok and Page, who were carrying on an extramarital affair at the time, both called then-candidate Trump an 'idiot' and made vague mention of an 'insurance policy' to ensure he would not be elected. Critics have speculated that the “insurance policy” referred to the investigation of potential ties between the Trump campaign and the Kremlin."

The author of the discredited Trump-Russia dossier is the former British spy Christopher Steele. He also sent intelligence reports to other federal agencies, such as the State Department. You can see this from the 66 records recently produced by the State Department to investigative reporter Eric Felten. Those records can be accessed by clicking here.

One of the emails produced by the State Department was sent by State Department official Jonathan Winer sent using his personal email account. Usually, agency officials are supposed to use their agency email account for official business, to ensure that records are preserved in accordance with the Federal Records Act.

As the Senate Select Committee on Intelligence notes,

"After Steele's memos were published in the press in January 2017, Steele asked Winer to make note of having them, then either destroy all the earlier reports Steele had sent the Department of State or return them to Steele...Winer told the Committee, 'So I destroyed them, and I basically destroyed all the correspondence I had with him' on Winer's personal devices."

Other State Department employees have also used their personal email accounts to conduct agency business, even though doing so undermines compliance with the Federal Records Act.

More needs to be learned about Steele's contacts with Obama administration officials, given the unreliability of his claims, and how federal officials made significant decisions based on them despite their unreliability. As the New York Times notes, "a top F.B.I. agent recognized by February 2017 that a now notorious dossier of claims about purported Trump-Russia ties had credibility problems, but the Justice Department continued to rely on it as part of its basis to renew permission to wiretap a former Trump campaign adviser, documents released on Friday showed." As the National Review notes, there were warning signs about its unreliability, and the CIA tried to talk the FBI out of relying on the "very unvetted" Steele dossier.