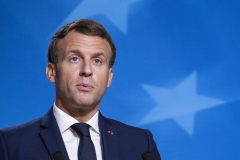 French President Emmanuel Macron talks to media at the end of the second day of an EU Summit on October 16, 2020 in Brussels, Belgium. (Photo credit: Thierry Monasse/Getty Images)

America has moved to the left so rapidly that Europeans are now expressing alarm about it. As journalist Glenn Greenwald notes, "Obama-endorsed French President Emmanuel Macron has joined numerous French intellectuals & journalists in warning that 'out-of-control woke leftism of US campuses and its attendant cancel culture' poses a grave threat due to the social strife it creates."

Greenwald links to a New York Times article that asks, "Will American ideas tear France apart? Some of its leaders think so. Politicians and prominent intellectuals say" that left-wing "social theories from the United States on race, gender, and post-colonialism are a threat to French identity and the French republic":

Emboldened by these comments, prominent intellectuals have banded together against what they regard as contamination by the out-of-control woke leftism of American campuses and its attendant cancel culture.....

France has long laid claim to a national identity, based on a common culture, fundamental rights, and core values like equality and liberty, rejecting diversity and multiculturalism. The French often see the United States as a fractious society at war with itself....The French state does not compile racial statistics, which is illegal, describing it as part of its commitment to universalism and treating all citizens equally under the law.

Biden's pick for civil-rights czar advocated black supremacy. Kristen Clarke, nominated to be the top official at the Justice Department's Civil Rights Division, opposed a court ruling that protected white voters from being disenfranchised in a majority-black county. She also exhibited racism and anti-Semitism at Harvard Law School. Writing in the Harvard Crimson,

Clarke cited a number of “experts” regarding what she called the “truth” about the “genetic differences between blacks and whites.”

The liberal editors of The Crimson found Clarke’s “racist theories” to be “outrageous,” saying that Clarke had “resorted to bigotry, pure and simple.”...Not long after she penned her letter claiming that blacks are genetically superior to other racial groups, the Black Students Association under her leadership invited professor Tony Martin to campus.

A notorious anti-Semite, Martin’s ensuing lecture about his tract, “The Jewish Onslaught,” was apparently a racist diatribe against the Jewish people, their history, and their traditions, claiming they were the source of the supposedly “ordained” notion of “African inferiority.”

Yet Clarke told The Harvard Crimson that “Professor Martin is an intelligent, well-versed black intellectual who bases his information on indisputable fact.”

President Biden's fiscal policy is also to the left of France's in some ways. Biden has proposed a $1.9 trillion stimulus package that economists say would shrink the economy in the long run. Even some Democratic economists say it is too big and poorly targeted, and could cause harmful inflation. It would also increase America's national debt to dangerous levels.

A $15 minimum wage would increase the budget deficit by $58 billion, and wipe out at least 1.4 million jobs.

Right now, minimum wages vary from state to state, from $7.25 to $14. States with lower living costs tend to have lower minimum wages to match. Economist Chris Edwards says that “Biden’s wage directive would eliminate jobs for younger and less-skilled workers whose economic contribution is worth less than $15 per hour” and would wipe out many business startups needed to replace jobs lost due to COVID-19.

People need jobs, but not everyone needs to be paid $15 per hour. Some people live in areas with very low living costs. Many low-living-cost counties in the United States — and Puerto Rico as a whole — have average or median wages below $15, yet most people there manage to raise families and own their own home. Forcing employers there to pay a $15 minimum wage would require them to pay what is currently an above-average wage to everyone, resulting in widespread bankruptcies and layoffs.