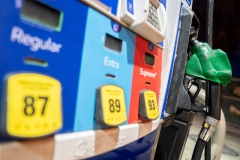 A gasoline pump sits in a holder at an Exxon gas station in Washington, D.C. (Photo credit: STEFANI REYNOLDS/AFP via Getty Images)

"If a driver was to fill up at Schlafer’s, they could find themselves paying the highest price for a regular gallon of gasoline ever documented in the history of the United States: $9.45.

"Patrick De Haan, the Head Petroleum Analyst for GasBuddy, confirmed that Schlafer’s is currently charging the most in the United States for gasoline. Being that California stands as the priciest market during a time when the United States has the highest gas prices in history, De Haan agreed that $9.45/gallon could 'very possibly' be the most expensive gallon of gas in the history of the United States....

"In a past interview, Judy Schlafer, the owner and proprietor of the service station, told us her prices are influenced by the fact the shop acts as an independent business, not a franchise of Chevron. Her business does not sell food and drink, the goods that most often bring profit to gas stations across the United States.

"Currently, California’s average price for a gallon of gasoline is $6.19/gallon with multiple locations reportedly selling their gas at more than $7.25/gallon, a watershed price superseding the federal minimum wage.

"The North Coast of California currently is one of the most expensive regions for drivers with Humboldt County being the highest average price on the North Coast at $6.69/gallon."

Gas prices continue to rise despite Joe Biden partially emptying the Strategic Petroleum Reserve. As the Daily Caller reported, gas prices rose every time Joe Biden released oil from the reserve, showing that it achieved nothing except leaving less in the reserve to deal with a future emergency.

Biden's release of oil from the reserve is just a political gimmick designed to make it look like he is trying to cut oil prices. Critics have argued that Biden's releases of oil were illegal, because they weren't in response to an emergency.

Thanks to Democrats’ past decision to keep President Trump from expanding the reserve back when oil was dirt cheap, the amount of oil in the reserve is just too tiny to have much effect on gas prices. America could have refilled and expanded the Strategic Petroleum Reserve in 2020 when oil was cheap, and then sold the oil later at a time of high prices, for a hefty profit.

In March 2020, President Trump proposed adding oil to the strategic petroleum reserve when oil cost only $14 per barrel, but Democrats blocked him from doing that. Now, oil is more expensive, $120 per barrel. Not buying oil back in 2020 cost the U.S. government the opportunity to make billions of dollars reselling the oil today at a profit of over $100 per barrel. If Congress had authorized the purchase of several hundred million barrels of oil for $14 back in 2020, the federal government could sell that oil today for over $100 per barrel, making tens of billions of dollars in profits (if Congressional authorized such a non-emergency sale, as it probably would).

But the oil reserve is nowhere near full, and no effort was made to expand its capacity when oil was cheap. Now, there is too little oil in the reserve to have much effect on oil prices, and the price of a barrel of oil could be even higher in a few months.