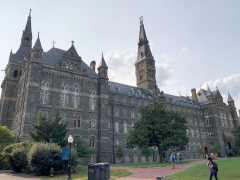 Recipients of non-racial preferences in admissions also get lower grades at the schools that admit them. I received lower than average grades as a student at Harvard Law School. Why? I was admitted with lower-than average credentials than most of my classmates (because I pledged to go into public-interest law afterwards).  So I was less prepared than most of my classmates, and occasionally had to struggle to keep up with my classmates. This did not mean I flunked out of school: I later passed the bar exam, and later played a key role in litigating three Supreme Court decisions dealing with federalism and the constitutional separation of powers, one of which is discussed in the Washington Times.

NBC News reported earlier on the brewing controversy at Georgetown, which led to an investigation of Professor Sandra Sellers:

Some Georgetown University Law students and alumni are calling for the termination of a professor captured on video discussing the performance of Black students.

The conversation between two law professors at the Washington, D.C., school was filmed and posted to the online database Panopto, where students, who have been attending classes virtually because of the pandemic, can access the recordings. The video is no longer available on the platform.

“We learned earlier this week that two members of our faculty engaged in a conversation that included reprehensible statements concerning the evaluation of Black students,” Georgetown Law Dean Bill Treanor wrote in a letter sent to the university Wednesday.

“We are responding with the utmost seriousness to this situation,” he wrote, adding that the University's Institutional Diversity, Equity and Affirmative Action Office has opened an investigation.

"The Law School is also pursuing additional responses and will act swiftly and seriously to address this incident," he said.

The professor was targeted simply for telling the truth, says Ted Frank, a lawyer who has won over $100 million in lawsuits, and several landmark court decisions: "The only thing reprehensible here is the statement of the Dean throwing his faculty member under the bus instead of telling students unpleasant truths. GU Law grading is blind and anonymous!"

So the professor is not saying she engaged in any kind of racism. As Frank notes, "African-American law students good enough to get into Georgetown Law end up going to Harvard and Stanford instead" because of those universities' racial preferences in admissions. As a result, "Georgetown Law has to" lower standards for black applicants, and "dive deeper into the pool to get a racially balanced class." As a result of these lower standards for black students, "African-Americans attending Georgetown Law are less qualified than average students, and perform worse in school."

This firing violates the "academic freedom" that Georgetown University contractually promises its faculty, which implement the "core principles" of academic freedom laid down by "the American Association of University Professors" (AAUP).

Such academic freedom has been contractually interpreted to protect speech even when it offends minority students. For example, the Wisconsin Supreme Court ruled that a professor opposed to same-sex marriage could not be punished for his speech by a private college, even though it allegedly led to members of the public expressing hostility to a lesbian graduate student. (See McAdams v. Marquette University (2018)).

Far worse speech has been held to be protected by the First Amendment under the rubric of academic freedom. For example, a federal appeals court ruled that a professor’s derogatory writings about black people were protected by the First Amendment. (See Levin v. Harleston, 966 F.2d 85 (2d Cir. 1992)). It also ruled that a professor had a First Amendment right to teach that Zionism is racism, even though that caused a “furor” on his campus.  (See Dube v. State University of New York (1990)).