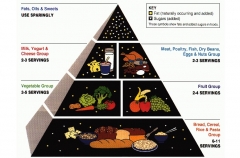 This was the Department of Agriculture's food guide pyramid. (Photo credit: USDA/Corbis via Getty Images)

As a young man, I ate based on the Agriculture Department's "Food Pyramid," while my twin brother ignored it. I ended up fatter and less healthy than him. Countless Americans were left with a misleading impression about what to eat by the Food Pyramid. As Inspira Health notes,

But many people found the stacked tiers confusing and interpreted them as steps to advance through....This led some people to eat only grains throughout the day, as that was the largest—and seemingly most important—tier on the pyramid."

The effect of this high-carbohydrate diet was to increase levels of obesity and diabetes. So the government caused the very obesity it sought to prevent with the Food Pyramid.

The government's anti-obesity efforts are also terribly disorganized and inconsistent.

"21 federal agencies manage 200 different diet-related programs, leading to overlap and chaos," reports Reason Magazine. Despite the millions of dollars in federal spending, there "is no overarching federal strategy to guide the government’s efforts to improve Americans’ diets," says a new report from the federal Government Accountability Office. It found that federal diet programs contradict each other, and result in considerable waste:

"Officials from three of the 16 agencies we interviewed mentioned federal efforts that work at cross-purposes or have conflicting outcomes....These officials said that USDA agricultural subsidies have created economic incentives for increased corn production. This has led to lower prices and increased consumption of corn syrup in Americans' diet. However, HHS public health goals call for reduced consumption of sugars such as corn syrup."

Yet the federal Department of Health and Human Services spent $766,000 to help open an International House of Pancakes, even though IHOP has sugary entrees that could make someone obese. IHOP served two of Men’s Health Magazine's 20 most unhealthy restaurant dishes. While warning about the dangers of eating fat, the Agriculture Department was simultaneously promoting greater consumption of fatty cheeses, reported the New York Times.

By increasing obesity rates, federal policies such as agricultural subsidies have increased healthcare costs and driven up health insurance premiums.

In 2018, "spending to treat cardiovascular diseases, cancer, and diabetes accounted for 26 percent of the approximately $1.5 trillion in total health care spending for U.S. adults," notes a GAO podcast. Obesity also increases the risk of dying from COVID-19. "People who contracted COVID-19 who reported underlying health conditions were six times more likely to be hospitalized and 12 times more likely to die," compared to those without diet-related chronic health conditions, says the GAO.

In 2011, the Agriculture Department stopped promoting the Food Pyramid, after nutritionists criticized it. It replaced the Pyramid with a plate with four quadrants for vegetables, fruits, grains, and protein.

But the government continued to give bad advice about what to eat. A 2010 study funded by the National Institutes of Health encouraged parents to stock their fridges with apple sauce, even though apple sauce has basically no nutrition unless vitamins are artificially added to it, since much of the vitamin C in an apple is destroyed when it is processed into apple sauce. Meanwhile, the NIH warned against consuming potatoes, which are rich in vitamin C, potassium, and various minerals. (Disclosure: I participated in that study for $100).  Baked potatoes are healthy, although some of potatoes’ vitamin C is lost if you process them into french fries.  Potatoes have much more vitamin C than bananas or apples.  And they have more potassium than supposedly potassium-rich bananas.

From 2009-2017, the federal government banned the use of Special Supplemental Nutrition Program for Women, Infants, and Children (WIC) money by low-income mothers to buy white potatoes, while allowing the money to be used for many less nutritious foods.