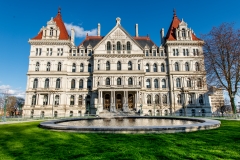 Legislatures are often very unrepresentative of the people at large, and they pass special-interest legislation that inflicts great harm. One way to make them more representative would be to add a third, randomly-selected house to state legislatures: a "House of the People" consisting of members selected by lot. If random selection is good for juries, and worked for ancient legislative bodies like the Athenian Council of Five Hundred, why not use it for our legislatures?

All states except for Nebraska currently have two houses in their state legislature, both elected by state voters. Although these houses are elected, they are not representative, because normal people rarely run for office. Normal people typically don't want to spend months running for office, repeating the same message over and over again, and begging for cash to pay for their campaigns. Normal people typically lack the ability to win elections, due to their lack of fundraising ability and lack of skill in mass communications.

Despite being popularly elected, legislatures often favor the interests of political elites and special interests, rather than normal people. That's because it is hard to remove incumbents who favor special interests, due to gerrymandering, incumbents' advantages in raising funds, media bias, and collective-action problems.

A partial solution to this problem is to add a new house to each state legislature, whose members would be randomly selected from the public at large. Such a house would be representative by nature. And it could block legislation passed by the other two houses of the legislature, whose members are part of the political elite, and financed by special interests. That would ensure that legislation favored by special interests and political elites cannot pass unless ordinary people also favor it. Members of the "House of the People" would be paid a salary, but would also be subject to stringent limits on receiving gifts and honoraria, to keep them from being bought off by special interests. They also would be barred from running for state office until at least two years after their term in the House of the People ends.

In 1979, a New York Times essay described how to make Congress more representative of the American people: select its members at random from all Americans over the age of 30. But random selection would require a constitutional amendment approved by Congress, and Congress would never agree to that. Nor would Congress vote to add a new, randomly-selected house of Congress. That would dilute the power of existing members of Congress, by forcing them to share legislative power with a third house.

So there is no reason why state constitutions can't be amended to include a new "House of the People" randomly selected from the population. All legislation should have to pass not only the two elected houses of the state legislature -- where members are experienced in drafting the language of bills -- but also the new "House of the People," as a check against special-interest legislation or bad laws favored by the political elites, but not ordinary people.

Because the new "House of the People" would be comprised of people with little or no experience drafting laws, it should only vote on laws passed by the other houses of the legislature, not draft its own laws. It would thus serve as a check and balance against bad laws, rather than being a source of bad laws of its own. (The fact that state legislatures regularly pass bad and unfair laws has been apparent for generations. Founding father James Madison, the "Father of the Constitution," was aware of this from his time in the Virginia legislature, and he tried to include in the Constitution a provision requiring that new state laws receive Congress's consent, as a way of reducing the flood of bad laws. But other founding fathers kept this provision from being added to the Constitution, because it would anger state governments and thus make it harder to get states to ratify the Constitution.)

Due to their inexperience, members of the House of the People might draft bad laws by mistake, if they were allowed to come up with their own laws. Inexperienced drafters of legislation are more likely to write bills that have unintended effects (although even experienced legislators sometimes write bills that backfire on their supporters).

Most ordinary people aren't very good at writing laws. For example, in Virginia, bills introduced "by request" -- that is, filed as a courtesy by a legislator, after being submitted by a constituent -- are much more likely to contain bugs or unexpected defects than bills conceived by legislators themselves.

Although the House of the People should be broadly representative of the population, it might be appropriate to select its members from age ranges that are best able to serve. Some people may be too old and infirm to handle being a legislator; others may be too inexperienced to appreciate their responsibilities or have meaningful ties to their community.

If people are too young to vote, or have forfeited their ability to vote by committing a crime, then they also should not serve in the House of the People, because serving in a legislature is a more demanding role than merely voting.