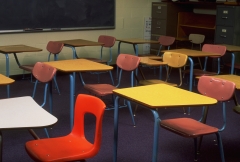 Many kids became fatter when schools closed to in-person learning during the coronavirus pandemic.

“Overweight or obesity increased among 5- through 11-year-olds from 36.2% to 45.7% during the pandemic, an absolute increase of 8.7% and relative increase of 23.8%,” noted the Journal of the American Medical Association.

That’s making the effects of the pandemic much worse.

“The evidence linking obesity to adverse COVID-19 outcomes is ‘overwhelmingly clear,'” say health experts. Over half of all people hospitalized for the coronavirus are overweight or obese, according to the Centers for Disease Control and Prevention (CDC).

Children very rarely die of the coronavirus, but they can suffer a lot from it, especially if they are fat. Obese people are much more likely to require hospitalization when they contract the coronavirus.

“Pediatric COVID-19 cases are surging, pushing hospitals — and health care workers — to their breaking points,” reports Time Magazine. New Orleans is one of America’s fattest cities, and is located in one of America’s least vaccinated states. Predictably, Children’s Hospital of New Orleans (CHNO) is facing a surge in hospitalizations. As Time notes, “Seventy young patients ended up in treatment at CHNO during the 30 days ending Aug. 23. Prior to this summer, the hospital had never had to care for more than seven COVID-19 patients at a time, and usually fewer than that; on any given day in August, that number has been at least in the mid-teens, enough that the facility had to call in a medical strike team from Rhode Island to help manage the surge.”

As Time notes, there’s no evidence that the current strain of coronavirus is more severe than the prior strain (although it does seem more communicable). Yet “more children are showing up” at hospitals “in worse condition than at any previous point during the pandemic,” reports Politico. This could be because kids are fatter and more out of shape in 2021 than they were in 2020, due to school closings. That leaves their bodies less able to handle the virus, and leaves them in worse condition when they show up at the hospital. But even today, “the overwhelming majority of children who contract the virus don’t require hospitalization, and pediatric deaths still make up less than one-tenth of one percent of all pandemic deaths, according to the CDC.”

Advocates of school closings claimed they were needed to protect people’s health. But by driving up obesity rates, school closings harmed students’ health. And shutting schools actually increases COVID-19 deaths, according to researchers at the University of Edinburgh.

“Schools do not, in fact, appear to be major spreaders of COVID-19,” said Brown University Professor Emily Oster. While a few students and staff have caught the coronavirus, this doesn’t show schools are dangerous: “Even if there were no spread in schools, we’d see some cases” among students and teachers, “because students and teachers can contract the disease off campus.” There is “little evidence that schools have contributed meaningfully to community transmission,” according to the federal Centers for Disease Control.

“Researchers from Yale University surveyed more than 57,000 U.S. child care providers.…They found no association between contracting the virus and exposure to child care,” reported the American Academy of Pediatrics. Studies find that children are much less likely to contract the virus than adults and also less likely to spread it.

In the past, the CDC has pointed out that closing schools “can lead to severe learning loss,” and that school closures kill more children than COVID. Moreover, “extended closures can be harmful to children’s mental health and can increase the likelihood that children engage in unhealthy behaviors.” As the head of the CDC noted in 2020, among the young, “we're seeing, sadly, far greater suicides now than we are deaths from COVID. We’re seeing far greater deaths from drug overdose” due to school closings.

In Virginia, school closings contributed to the “biggest collapse in pass rates in the history” of standardized testing, notes journalist James A. Bacon. Schools where students learned only online had a 35.7% decline in pass rates, much worse than schools that remained open to in-person learning.

Schools have long been open in many countries, such as Spain, Italy, France, Norway, Finland, Germany, Sweden, Switzerland, Austria, and Russia.

France "has kept schools open throughout most of the COVID pandemic,” notes RFI. America should keep its schools open, too.

Politics, not public health, was behind most decisions to keep schools closed. Local officials’ decisions were driven mainly by teachers “union influence and politics, not safety,” reported Reason Magazine. It noted that Jon Valant, a researcher at the liberal Brookings Institution, found that decisions to keep schools closed were driven by politics, not levels of “COVID-19 risk.” Left-wing teachers unions repeatedly thwarted school reopenings. Some used “sick-outs” to shut down schools and force school boards to delay school openings.