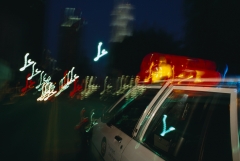 Featured are the lights on a police car. (Photo credit: David Butow/Corbis via Getty Images)

In 2020, murder rose at an unprecedented 30 percent annual rate, as incarceration rates fell, police manpower shrank, and anti-police protests spread across the nation.

As the New York Times noted, "There is no precedent for last year's increase in the number of murders." The previous largest one-year increase was 12.7 percent, in 1968. And the murder rate is still going up in 2021. The Times reports that "data from 87 cities with publicly available year-to-date data shows murder up by 9.9 percent relative to comparable points in 2020. Some cities like Portland, Ore., and Las Vegas are seeing big increases relative to last year."

Some observers wonder whether this spike in killings was caused by the coronavirus pandemic, but global crime data shows it wasn't. A recent Washington Post editorial “Too much death” asked whether homicides rose in America because of “the COVID-19 pandemic” or “national protests” against the police.

The "protests" likely were a factor. But the pandemic wasn't. The pandemic killed people across the globe, and plunged most of the world into a recession. Yet the United States was almost alone in having a huge increase in homicides. Most of the world saw reductions in homicide rates in 2020.

Murder rates actually fell in most countries that lost many people to the coronavirus. Peru had the world’s highest coronavirus death rate per million inhabitants. Yet Peru’s homicide rate fell by more than 2 percent in 2020.

Three times as high a percentage of Peruvians died of the virus vs. Americans. Many Peruvians lost their jobs, schools and social services shut down, and Peru's economy shrank by around 12%, unlike America's economy, which shrank by only 3.5%. Yet, Peru's murder rate fell.

The Daily Wire notes that "it wasn't the pandemic that increased violent crime in America." Instead,

"The rise in violence coincided with anti-police rhetoric and laws as well as lawlessness in major cities across the U.S. following the police-involved death of George Floyd. The treatment of police by Democrats and their media supporters led to massive resignations and retirements in the police force.

The New York Times addressed the issue after the Asheville Police Department in North Carolina announced it had lost 84 officers and would no longer be able to respond to numerous crimes, including theft from a vehicle if there is no suspect information and simple assaults reported after they occurred."

A progressive politician speculated that the rise in violent crime was due to "more people without jobs, more people desperate for money" as a result of the pandemic. But nations where many people are poor and hungry, like Honduras and Venezuela, had falling murder rates in 2020, even though their economies shrank more than America's.

And murders decreased in the United States during the 2007-2009 recession, when many people lost their jobs and ran out of money. And as the Daily Wire noted, in many countries, murder rates actually went down during the COVID-19 pandemic.

London, for example, saw a 16% decline in its murder rate in 2020, even though England’s economy shrunk 9.9% during the pandemic, while America’s shrunk only 3.5%. In Italy, murders fell by 14%. Murders in France declined 2% in 2020, while Japan is seeing its lowest murder level since World War II.

Another factor in rising violence is falling incarceration rates, which result in violent offenders being released from jail or not being jailed in the first place. The number of people in America’s prisons and jails dropped by 14% from 2019 to mid-2020.

Police manpower was shrinking even before the George Floyd incident, which accelerated the trend. In the last few years, there has been "a notable decline in the number of police on the beat," said Rafael Mangual of the Manhattan Institute:

"In a September 2019 report, the Police Executive Research Forum outlined what it declared a 'workforce crisis.' A robust body of research has thoroughly illustrated that more police means less crime — a finding at odds with ever-more-popular calls to 'defund the police.' It stands to reason that a significant decline in the sizes of the nation’s police forces could have helped set the stage for the violent crime uptick. There is also reason to believe that — in part because of the anti-police sentiments that characterized last summer’s protests — the cops we have left became less proactive."

Many murderers are spending less time in prison, due to recent “criminal justice reforms” -- even though short sentences are less effective at deterring crime than longer sentences. California recently made tens of thousands of violent offenders eligible for early release (including killers), and it earlier expanded parole for young adults who committed murder. Last year, Washington, D.C.’s city government made murderers eligible to seek release after 15 years, if they committed their crime before age 25.

In places like San Francisco and Los Angeles, left-wing district attorneys have recently refused to prosecute any minors — even murderers — in adult court. So murderers who commit their crimes at age 17 will not be locked up for more than a few years. Shootings rose 73 percent in Los Angeles in the first four months of 2021, after rising 40 percent in 2020. Murder rates peak in the late teens and early 20s. About four in ten killers commit their crime before age 25. Juvenile killers often commit more violent crimes after being released.