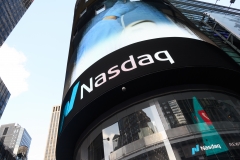 Pictured is the outside of NASDAQ's office in Times Square. (Photo credit: Noam Galai/Getty Images)

The stock exchange NASDAQ plans to impose racial quotas on companies that are listed on it, requiring them to violate federal law. Under a proposed NASDAQ rule, corporations would have to put at least one minority and one woman on their board of directors.

Such racial quotas violate a federal statute, 42 U.S.C. 1981, which forbids racial discrimination in contracts, and which has been interpreted by the Supreme Court as forbidding racial quotas even when such quotas are motivated by a desire for diversity. Yet the ACLU is applauding this illegal requirement.

NASDAQ is proposing new rules that would mandate diversity in the boardroom for companies listed on its stock exchange. Nasdaq filed a proposal with the U.S. Securities and Exchange Commission Tuesday that…would require companies on the stock exchange to have at least one woman director and one who self-identifies as an “underrepresented minority” or member of the LGBTQ community — or face possible delisting.

Foreign and smaller companies would be able to satisfy this requirement with two women directors on their boards. NASDAQ defines “underrepresented minority” as an individual who self-identifies as Black or African American, Hispanic or Latino, Asian, Native American (including Native Alaskan or Hawaiian), Pacific Islander or someone who is two or more races.

The new rules still need to be green lit by the SEC. Under the proposal, however, NASDAQ-listed companies will be required to publicly disclose its [sic] board diversity statistics within one year of the SEC’s approval of the new rules. From then, all companies will be expected to have one diverse director within two years of the SEC’s approval of the rule.…If companies do not meet the diverse board requirements within the timeframes, they will have to provide a public explanation for why or face possible delisting from the exchange. …

The proposal has garnered support from the American Civil Liberties Union. Anthony Romero, the ACLU’s executive director, lauded NASDAQ for “heeding the call of the moment.”

But racial quotas are forbidden as a means of pursuing diversity, even in the unusual contexts where an applicant’s race can be considered to promote diversity. That’s what the Supreme Court ruled when it struck down a racial quota in college admissions. It ruled that violated both the Constitution and 42 U.S.C. 1981, which bans racial discrimination in public and private contracts. (See Gratz v. Bollinger, 539 U.S. 244, 276 n.23 (2003)).

Moreover, corporate boards are not an area where diversity justifies the use of race at all. Most courts say that in employment, as opposed to college admissions, diversity is not a reason to consider an applicant’s race. An appeals court struck down a federal diversity regulation imposed on broadcasters for that reason, finding it unconstitutional. (See Lutheran Church–Missouri Synod v. FCC (1998)).

Another appeals court ruled it violated Title VII of the Civil Rights Act to make layoff decisions based on race in order to maintain “diversity.” (See Taxman v. Board of Education (1996)).

Quotas also aren’t a valid response to any discrimination in the business world — and the proposed rule cites no examples of such discrimination, focusing instead on what it describes as the “underrepresentation” of minorities on corporate boards.

The fact that minorities may be underrepresented on corporate boards doesn’t prove discrimination against them by corporations. The Supreme Court said underrepresentation isn’t the same thing as discrimination in striking down the City of Richmond, Va.’s racial set-asides in government contracts as unconstitutional. The city had preferred blacks in contracts, in response to blacks being 50% of the city population, yet getting only 1% of city contracts. The Supreme Court said that that disparity wasn’t, by itself, proof of discrimination, in its ruling in Richmond v. J.A. Croson Co. (1989).

The Supreme Court explained in its Croson decision that quotas violate, rather than promote, equality, calling it “completely unrealistic” to expect groups to be represented in each field or activity “in lockstep proportion to their representation in the local population.”

The courts have struck down even gender quotas for government boards and commissions in cases such as Back v. Carter. Racial quotas are even more contrary to the federal law than gender quotas, because racial classifications are subject to strict scrutiny under the federal constitution and 42 U.S.C. 1981, while gender classifications are subject only to intermediate scrutiny under the federal constitution.

Even if some corporations had records of discrimination, that would not justify a blanket racial quota imposed on all companies’ boards — especially not discrimination in the distant past. Many courts have ruled that discrimination has to be recent, like in the last 20 years, before it justifies a racial preference. (See, e.g., Hammon v. Barry (1987); Brunet v. City of Columbus (1993)).

Usually, a racial preference can only be justified by the need to remedy the present effects of a recent, “systemic pattern of discrimination” against minorities. (See Coral Construction Co. v. King County (1991)).

In addition to 42 U.S.C. 1981, other federal laws also may be infringed by NASDAQ’s racial and gender quota. Title VII of the Civil Rights Act generally forbids racial and gender quotas and prohibits an employer like NASDAQ from forcing such quotas on other employers. Title VII lets companies use affirmative action in limited circumstances — namely, to fix what the Supreme Court calls a “manifest racial imbalance” in “traditionally segregated job categories.”

But companies don’t necessarily have such a racial or sexual “imbalance” just because they have no women or minorities on their board. If there aren’t many blacks in the high-tech field, it’s not a high-tech company’s fault that it doesn’t have many black employees, either. That isn’t considered a “manifest imbalance.” And if few women work in a sector like metallurgy, a metallurgical company won’t be deemed to have a manifest sexual imbalance just because it has no female managers or board members. (See Janowiak v. South Bend (1984)).

And there just aren’t many black people in high-tech. “Blacks made up 7 percent of U.S. high-tech workforce” and just “3.1 percent” of people in technical jobs at major U.S. tech companies, according to Fortune.