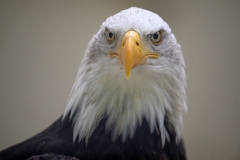 A wind energy company pleaded guilty to criminal charges and was ordered to pay over $8 million in fines and restitution after its wind farms killed at least 150 eagles, reports the Associated Press:

"NextEra Energy subsidiary ESI Energy was also sentenced to five years probation after being charged with three counts of violating the Migratory Bird Treaty Act during a court appearance in Cheyenne, Wyoming. The charges arose from the deaths of nine eagles at three wind farms in Wyoming and New Mexico.

"In addition to those deaths, the company acknowledged the deaths of golden and bald eagles at 50 wind farms affiliated with ESI and NextEra since 2012, prosecutors said. Birds were killed in eight states: Wyoming, California, New Mexico, North Dakota, Colorado, Michigan, Arizona, and Illinois.

"NextEra, based in Juno Beach, Florida, bills itself as the world’s largest utility company by market value. It has more than 100 wind farms in the U.S. and Canada and also generates natural gas, nuclear and solar power.

"Almost all of the eagles killed at the NextEra subsidiary’s facilities were struck by the blades of wind turbines, prosecutors said. Some turbines killed multiple eagles and because the carcasses are not always found, officials said the number killed was likely higher than the 150 birds cited in court documents."

"Nuclear power is the safest form of energy we have, if you consider deaths per megawatt of energy produced," notes Yale University professor Steven Novella.

“Every major study, including a recent one by the British medical journal Lancet, finds the same thing: nuclear is the safest way to make reliable electricity,” says Shellenberger. By comparison, “solar panels require 17 times more materials in the form of cement, glass, concrete, and steel than do nuclear plants, and create over 200 times more waste,” such as “dust from toxic heavy metals including lead, cadmium, and chromium.”

In The New York Times, Harvard’s Steven Pinker and two environmental experts argued that nuclear power plants are essential to the success of a green power grid. Renewable energy alone cannot meet America’s energy needs in the foreseeable future. And nuclear plants have become much more efficient and reliable in recent years. France and Sweden replaced most of their fossil-fueled electricity with nuclear power, and as a result, ended up emitting less than a tenth of the world average of carbon dioxide per kilowatt-hour.

Nuclear power is best in environmental terms. It produces no air pollution or greenhouse gas emissions (just harmless steam). And it provides the steady flow of energy needed for a carbon-free power grid, because unlike wind or solar power, it produces a constant, reliable flow of electricity regardless of whether the weather changes.

As the Washington Examiner has noted, shutting down nuclear power plants would increase greenhouse gas emissions, and make it harder to prevent climate change:

“The International Energy Agency has concluded that meeting the goal of keeping warming to no greater than 2 degrees Celsius would require doubling global nuclear energy generation capacity by 2050. The Intergovernmental Panel on Climate Change, which is often cited as the leading authority by liberals, reached a similar conclusion.”