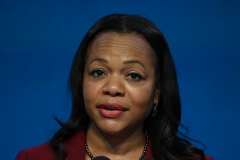 The Justice Department claimed the state’s recently enacted election reform law, SB 202, violates the 1965 Voting Rights Act because it discriminates against black Georgia voters. The complaint reads like a press release drafted by the Democratic National Committee instead of a serious lawsuit by an apolitical Justice Department.

Clarke claims the new law has a discriminatory effect and that Georgia legislators “intended to deny or abridge the right of black Georgians to vote.” These claims are without merit and appear to be driven by the Biden administration’s disagreements with Georgia’s policy choices. The law does not discriminate under the Voting Rights Act.

For example, contrary to the Justice Department’s claim, there is nothing remotely discriminatory about requiring individuals to request an absentee ballot at least 11 days before Election Day instead of the prior deadline of only four days.

The lawsuit fails to mention that in July 2020, the U.S. Postal Service sent a letter to every state, including Georgia Secretary of State Brad Raffensperger, recommending “strongly” that states change their deadline for voters to request an absentee ballot.

The Postal Service told states the optimal deadline should be at least 15 days before Election Day “to account for [USPS] delivery standards.” Georgia acted to protect its voters, not disenfranchise them.

Georgia’s voter ID requirement for in-person voting has been in place without any problems since 2008, after courts decided it was both constitutional and did not discriminate under the Voting Rights Act. Yet the Justice Department’s lawsuit claims extending the ID requirement to absentee ballots racially discriminates.

What is particularly bizarre about this claim is that Georgia’s voter ID requirement is similar to Alabama’s voter ID law, which was enacted in 2014 and applies to both in-person and absentee balloting.

Just last year, the 11th U.S. Circuit Court of Appeals threw out a lawsuit filed against Alabama that made the same arguments the Justice Department is now using against Georgia. The court concluded that the law did not violate the Voting Rights Act and that the voter ID requirement for absentee ballots constituted a “minimal burden” on voters.

Both Georgia and Alabama are within the 11th Circuit’s jurisdiction, where the issue has already been decided.

The Justice Department also claims Georgia’s prohibition on providing food and water to people waiting in line to vote racially discriminates. The Justice Department says this prohibition will prevent “churches, non-profit organizations, and other groups from sharing food and water to encourage voters not to abandon long lines to vote due to hunger or thirst.”

Every state bans electioneering nearby polling places and voters. Prohibiting the giving of money and gifts—including food and water, as SB 202 does—to prevent the undue influence of voters waiting to cast ballots is a wise and reasonable policy. The Justice Department acknowledges that SB 202 allows poll workers to distribute water to voters waiting in line and that voters can bring their own snacks and water.

Additionally, voters in Georgia are not stranded in the Sahara Desert. The prohibition only applies close to polling places in order to avoid electioneering perpetrated by candidates and supposedly nonpartisan (wink, wink, nod, nod) organizations.

Such a prohibition is certainly not racially discriminatory since it affects all voters equally. The new Georgia ban on food and water is virtually identical to a New York election law that prohibits giving voters “any meat, drink, tobacco, refreshment or provision” unless it has “a retail value of less than one dollar.”

The Justice Department has not sued New York over this long-standing prohibition or claimed that it is racially discriminatory. Could that be because it is a blue state represented by Sen. Chuck Schumer (D-NY), an important political ally of Attorney General Merrick Garland and his boss, President Joe Biden?

The Justice Department also claims it is discriminatory that Georgia has banned permanent absentee ballot lists. This means a voter must request an absentee ballot for each election. This is, in fact, an election best practice.

No reasonable person would think there is anything discriminatory about any of these provisions regarding absentee ballot requests, particularly given how notoriously inaccurate voter registration lists are and how hard it is for states to keep them up to date and remove individuals who have died or moved away. The allegations in this complaint lack any modicum of common sense.

The Justice Department also claims that Georgia’s refusal to count provisional ballots cast outside a voter’s assigned precinct before 5 p.m. on Election Day, unless the voter signs a statement explaining why he was unable to vote in his assigned precinct, is racially discriminatory. But Georgia already provides an accommodation in counting such ballots in the first place.

How is requiring an explanation from a voter before extending this accommodation—one that is not required by federal law—possibly discriminatory?

The Supreme Court is considering this very question in Brnovich v. Democratic National Committee. The court will, likely, issue its decision this week. We guess the Justice Department could not wait a few more days to file its lawsuit to see whether, and how, the court will resolve this issue.

There is also the issue of ballot drop boxes. There is no right under the Voting Rights Act to the use of absentee ballot drop boxes. Georgia never allowed drop boxes until last year’s election, and then only through an emergency rule issued by the State Election Board. SB 202 legalized drop boxes, providing that each county can have one drop box and an additional number per “100,000 active registered voters in the county or the number of advanced voting locations.”

The Justice Department also apparently does not like that the law requires the drop boxes to be “under constant surveillance by an election official, law enforcement officer, or license security guard,” a basic security protocol. Ballot boxes inside polling places are constantly monitored. Isn’t that even more important when they are on the streets?

The Justice Department’s complaint lists random remarks and incidents that it believes show state legislators acting intentionally to pass this legislation to discriminate against voters. For example, the complaint claims a “U.S. Senate candidate mispronounced and mocked the pronunciation of then-Senator Kamala Harris’ first name during a campaign event, despite having been her Senate colleague for four years.”

According to Garland’s Justice Department, that is evidence that the Voting Rights Act has been violated, even though it is irrelevant to anything that happened in the state Legislature.

In another example, anonymous, hate-filled, racist threats were sent to Ebenezer Baptist Church, where now-Sen. Raphael Warnock, D-Ga., was a pastor. That is shameful, to be sure, and something no one condones.

But what does that have to do with the legislation passed by the Georgia Legislature? The Heritage Foundation sometimes receives anonymous, hate-filled, racist messages, too, over our efforts to guarantee the integrity and security of the election process through commonsense reforms. Does that mean that opponents of election reform, including Garland and Clarke, are engaging in racially discriminatory behavior by filing this lawsuit?

This complaint is nothing less and nothing more than a partisan lawsuit and an abuse of the Justice Department’s enforcement authority under the Voting Rights Act.

Every allegation in the lawsuit, from the objection to voter ID requirements to voting in each voter’s assigned precinct, is based on the patronizing view that black and other minority voters are somehow not as capable as other voters of dealing with election rules and procedures.

That is obviously and clearly not true, but it is the shameful and embarrassing position the Justice Department takes today.