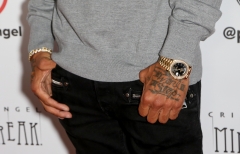 Monday night, the looting of New York moved on to the luxury-brand flagships of Manhattan’s Soho and Midtown.

Gov. Andrew Cuomo correctly noted that looters were simply taking this moment to steal, to smash, and grab a Rolex. It may seem self-evident why looters prefer luxury, but it’s still worth pondering.

To be sure, if you’re a thief who simply wants quick cash, it makes sense to steal something small, light, and valuable that can be pawned or sold on the street. A Rolex fits the bill. But what makes a Rolex so valuable? It’s not just its capacity for timekeeping. Looters understand the intangibles of brand as status because the people they envy are also seduced by such charms: look at the ad pages in The New Yorker and the New York Times Magazine.

Looters have absorbed the message that such baubles can be confused with actual accomplishment, can substitute for a purposeful life built in small steps, a family nurtured, a child looked after. They regularly hear the message that modest jobs and an honest living are for chumps. Look no further for that demoralizing message than ubiquitous state lottery advertising, which conflates striking it rich—from the state treasury, built by taxpayers who work for a living—with the gratification and satisfaction of personal achievement.

They hear, too, the message of inequality as injustice. By such thinking, all material and capital gains are considered ill-gotten. Just listen to Bernie Sanders on greedy drug companies, amoral banks, and wealthy individuals.

“The looting of America has been going on for over 40 years,” he says, “and the culprits are the ultra-rich.”

This logic, filtered down to the street, forgives looting as sticking it to the man. Taking a Rolex becomes social justice, a prize to be waved at like-minded peers, who are taught in the public schools that America’s history is a litany of injustice, that the country was built entirely on ill-gotten gains. What goes around comes around.

In The Cultural Contradictions of Capitalism, Daniel Bell, the Harvard sociologist who was himself a child of Lower East Side poverty, described the values that make for a healthy society.

Once the individual was released from “traditional ascriptive ties (family and birth) so that he could ‘make’ something of himself,” Bell said, it was crucial that he become capable of “self-control and deferred gratification, of purposeful behavior in the pursuit of well-defined goals. It’s the interrelationship of this economic system, cultural and character structure, which comprised bourgeois civilization.”

We’re witnessing the erosion of faith in our economic system and a retreat from the character fundamentals that built our prosperity. The result, at its most base, is smash-and-grab.

Howard Husock is a contributing editor at City Journal, as well as a a Manhattan Institute senior fellow, previously serving as the organization's vice president for research and publications from 2006-2019.