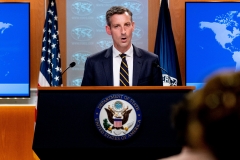 With the American media as master of ceremonies, pundits and politicians—all partners in the neocon-neoliberal joint venture in Afghanistan—are barking mad over the images coming out of the Hamid Karzai International Airport in Kabul, and the reality these optics portend.

Naturally, media “reporting” from Afghanistan is nothing but an unremitting sentimental gush, aimed at creating a state of heightened emotions.

Forbes reporters dissolved into puddles of tears at the sight of U.S. Air Force pilots bringing in plane loads of young, strong, military-aged men, unfreighted by women and children.

“Make no mistake,” slobbered Forbes, “lifting six times more people than an aircraft is designed to seat is a heroic achievement of logistics, skill, and sheer grit.”

I see a medal of commendation in the future of the Empire’s Pilot, who commandeered a U.S. Air Force C-17 to airlift 800 Afghani passengers from Kabul to Qatar.

War: The Health of the State —and the Statists

So, who exactly are those “trapped” Americans living in Afghanistan?

What are they doing in such inhospitable climes, in a country most of whose inhabitants hated the American presence? And what is their business in Afghanistan? The incurious moron media have never asked.

My guess is that U.S. citizens in Afghanistan have hitherto lived within Army-erected green zones, paid for by American taxpayers.

My guess is that these Americans are mostly military contractors, an extension of the military-industrial-complex—also the ultimate state, make-work scheme.

A likely breakdown of our “Americans in Afghanistan” comes via Danger Zone Jobs, which "tracks more than 300 companies with overseas contracting jobs in Afghanistan, Iraq, and other countries.”

Most “jobs” for Americans in a place like Afghanistan revolve around the military, “the two primary sources of jobs [being] with private contractors supporting the military and companies who subcontract to various international relief and development efforts.” In other words, the NGO racket.

By Danger Zone Jobs’ accounting, “Approximately 29,389 DoD contractors supported operations in Afghanistan during [the 1st quarter of 2019].” There you have it. To paraphrase Randolph Bourne, war is the health of the State and the statists.

Still, you are not a good American unless you fret about Afghani translators (who, in turn, complain on-camera endlessly, and as loudly as CNN’s Dana Bash, about American dereliction).

Similarly, you are not a good pack animal unless you worry about “the Uyghurs, the Uyghurs. China is oppressing the Uyghurs. Our values, our values.”

Uyghurs are also China’s biggest headache, now that America is no longer mired in Afghanistan. What the dummies on the idiot’s lantern fail to tell you—although analysts at The Economist do—“Uyghurs count among thousands of foreign jihadists active in Afghanistan, mostly enlisted in Taliban ranks.”

So, as the skittish media hounds and politicians, stateside, gnash teeth and beat on breast over Afghanistan, less hysterical countries, abutting Afghanistan, are acting calmly in their national interest, to ensure that jihad and heroin don’t spill over their borders.

Unlike Lara Logan of Fox News, who thinks America could have won a war that other superpowers have lost—the Chinese and the Iranians are hip to what just happened. This was “probably one of the best conceived and planned guerrilla campaigns ever,” says Mike Martin, a former British army officer in Helmand province, now at King’s College London. “The Taliban went into every district and flipped all the local militias by doing deals along tribal lines.”

In negotiations with the Taliban, Beijing has thus realistically demanded that Afghanistan not become “a base for ethnic Uyghur separatists.” For their part, “Taliban leaders have pledged to leave Chinese interests in Afghanistan alone and not to harbor any anti-China extremist groups.”

Like Beijing, Teheran, too, is busying itself with realpolitik. While Iran is “delighted to see the Great Satan, America, abandon its bases next door,” it worries about cheap heroin flooding in from Afghanistan, as well as the persecution of the tiny Shia minority of Afghanistan.

There is another matter that vexes the Shia of Iran, but is of no concern to the State Department, which generally “doesn’t know Shiite from Shinola” (The phrase is, “Doesn't know sh-t from Shinola.”)

“Shia Muslims…view their own Islamic revolution as a modernizing movement,” explains the Economist. After all, “women can study, work, and hold office in Iran, so long as they veil.”

Consequently, Iranians “look askance at the Taliban’s hidebound Sunni fanaticism.” Shia Iran worries about the Sunni insanity, and rightly so.

That’s yet another aspect of foreign policy that good Americans are not permitted to question. When did Iran last commit terrorism against America? As I chronicled in 2017: “Iranians killed zero Americans in terrorist attacks in the U.S. between 1975 -2015.”

What do you know? When compared with Sunni Islam (for example, Saudi Arabia’s Wahhabism), a faction of Islam with whose practitioners the West feels much more simpatico—Shia Islam (Iran’s poison of choice) is more enlightened. Yet America and Israel side with Saudi Arabia, the epitome of Sunni insanity. Go figure.

After Afghanistan, we can all agree that American foreign policy is an angels-and-demons Disney production—starring the prototypical evil dictators killing their noble people, until the U.S. rides to the rescue—and that the producers at Foggy Bottom don’t have the foggiest idea what they are doing.

Ilana Mercer has been writing a weekly, paleolibertarian think piece since 1999. She’s the author of Into the Cannibal’s Pot: Lessons for America From Post-Apartheid South Africa (2011) & The Trump Revolution: The Donald’s Creative Destruction Deconstructed” (June, 2016). She’s on Twitter, Gab, YouTube & LinkedIn; banned by Facebook, and has a new Podcast