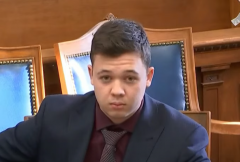 For the longest time, the American People — an inchoate concept that sadly no longer means much — have endured great wrongs. Examples of these wrongs are en masse legal and illegal immigration, open-borders, the kind of multilateral trade deals that immiserate, impoverish, and hollow out communities once staid and settled. And now, vaccine mandates: Take the State’s hemlock or lose your job.

As a rule, private property — corporations — once shielded the individual from the State. No longer. American Big Business now gleefully enforces the State’s Law of Rule. There is nowhere left to run.

Ubiquitous black-on-white crime inflicted by a coddled criminal class, native-born and energetically imported, is high on the list of State and corporate crimes against the citizenry.

Whether he postures on TV or on the Hill — the arguments advanced by the typical Republican front man against these defining depredations are, however, empty.

The "objections" put forth by Republicans in defense of their constituency are all theater and farce. It is essential to alert the voter to this void, mirrored, for example, in this columnist’s February 2019 warning that, "every time a manifestly racist, anti-white event goes down, which is frequently, conservative media" and politicians can be relied on to dub it "identity politics." 'The left is playing identity politics,' they intone. "They are dividing us," they’ll lament.

However, "whatever is convulsing the country, it’s not identity politics," but anti-white politics, pure, simple, and systemic.

Identify the bogus argument — and you will have exposed the frauds who want you to send them to live off the fleshpots in Rome-on-the-Potomac. (Actually, as one wag perspicaciously pointed out, it's "not a fair comparison to Rome." After all, [Rome] built two great civilizations and is a site of enormous cultural significance.")

Although not exclusive to him, my example today comes from Fox News' Jesse Watters. When speaking loudly over his guest — why invite them on, if you intend to drown them out? — Mr. Watters made the usual Republican straw argument against black crime. You hear it routinely from Hannity, Owens and the rest:

Likewise, it can be said that Republican don’t much care when a black person takes a white life.

Seldom mentioned in Republican argumentation is the real hate crime in the room: black-on-white crime which is invariably not reported, underreported, or if reported, masked as something other than what it really is, which is systemic, institutionalized, white-hot hatred of whites.

Republicans just can't seem to protect or stick up for besieged whites and are forever searching their brains for ways to show off their Abe Lincoln pedigree.

The latest in this political genre comes courtesy of J. D. Vance, who had shunned Trump, but has recently found religion on the president's populism:

"I don't care if we are talking about a little black girl in 1965, or a little white girl in 2021, telling a little girl that she is evil because of her skin color is disgusting and vile," Vance thundered at a conference on national conservatism.

And what is my objection to what Vance said, you ask? It is very plainly this: It is not 1965! And the victims of white-hot hatred are white, not black.

For Republicans, however, it is impossible to mention white suffering without dragging in the "black experience."

Again was this vintage Republican habit — using weasel words to preen politically and sound fair and impartial — on display in the Kyle Rittenhouse affair.

Even though Republicans assured us the Rittenhouse case was “not about race,” their quicksilver political instincts kicked in, telling them reflexively to bring in the “black experience.”

Republican Dana Loesch thus proved incapable of defending white Kyle on Fox News, without inserting the blandest of bromides about “black businesses” being burned in Kenosha during BLM riots, on that day.

Wearily familiar, then, was the substance of Ms. Loesch’s tweet, which was echoed on Fox News to Watters Monday as she said "all I saw was a white, convicted pedophile who got out of a mental institution, decided to go to a riot and help burn down black-owned businesses, another white, domestic abuser who's charges included strangulation and kidnapping, and another white criminal who was illegally carrying a firearm -- white, white, and white, all with Antifa burning down black-owned businesses, so people want to have a discussion about race: there you go."

In Republican vernacular, white kid Kyle just doesn’t cut it as a cause absent the moral padding of the “black experience.”