Canadian Truckers Have Endured Lies, Looting, and Lockdowns. They Deserve Our Thanks 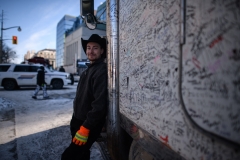 Truck driver Spencer Bautz, 24, poses for a photo beside his truck covered in messages from supporters, during a protest by truck drivers over pandemic health rules and the Trudeau government, outside the parliament of Canada in Ottawa. (Photo credit: ED JONES/AFP via Getty Images)

Where in the story of the travails of the world’s heroes, the Canadian Truckers for Freedom, are we?

Justine Trudeau, who fled like a girl into hiding when the lorry drivers, kids in tow, first arrived in Ottawa, has done what this writer had feared he’d do: After instituting some of the most diabolical COVID restrictions in the world, Justine has the dubious distinction of invoking “the never-used Emergencies Act,” martial law, in essence, to quash peaceful, democratic civil disobedience, with nary a democratic debate in the People’s House of Commons.

Been there done that, Mr. Turley, Esq.: Trudeau had already instituted some of these measures through COVID restrictions. Countrywide, unvaccinated Canadians have been locked out of society, turned into untouchables. They cannot travel within their own country, work for their own government, or attend university without being shamed and segregated, or take employment in the health sector, public or private.

And he’s done this evil with vim and venom. Never before have I heard a Western leader boil over with bile for his mostly-white, working-class countrymen. With his daily invective, Trudeau outdoes the Democrats stateside. Having libeled the truckers as bigots — Trudeau likewise regularly calls the unvaccinated racists, misogynists, and anti-science extremists, even pondering whether he should “tolerate these people.”

Yet the protests against anti-constitutional COVID-motivated segregation just keep growing; and province-by-province, the indomitable resistance is toppling the regimen of restrictions and discrimination. In quick succession, the system of segregation developed around vaccination has begun to crumble across Canada in the wake of trucker persistence. Bickering words from Ontario Premier Doug Ford notwithstanding, the truckers he derides are leading the once-Free World's resistance against a tyranny unprecedented in recent memory.

The World owes Canada’s finest a debt of gratitude.

Inspired by the quixotic Canadians, liberty-loving Europeans are rising against the Continental COVID cartel that has created tiers of subjects, some better than others. In France, Belgium, the Netherlands, and Austria, brave men and women are demanding their liberties be reinstated, many waving the Canadian flag in recognition of those who went before. They are doing the same in New Zealand and Australia, even in Israel.

As Mr. Ford announced, his government would be removing its “proof-of-vaccination-system on March 1.” He was quick to stress that this reprieve was despite the trucker protest and not because of it, but the verbally flatulent premier is not kidding anyone. He and his ilk are running scared.

Lucky are the little children who have freedom-loving parents. Luckier still are the kids who’ll get to witness their parents triumph over pure evil. We learn that there are children in 25 percent of the trucks which occupy Ottawa. Victory notwithstanding, the calibrations and considerations the Ottawa Gestapo is making as to how to evacuate the Resistance, embedded among which are so many kids, is foreboding, given the license that martial law lends.

Canadian Truckers For Freedom want to see the provincial and national COVID restrictions rolled back and a mechanism put in place to ensure the travesties they've endured don’t ever repeat themselves.

But wait a sec: Canada already has such a mechanism. It has a constitution. While not nearly as glorious as the American one — for no men in living memory were as magnificent as the intellectual warriors in periwigs who gave us the founding documents — it nevertheless apes the U.S. Bill of Rights, albeit poorly, by including a Charter of Rights and Freedoms. Rights-violating, country-wide COVID tyranny and the actions taken by the Ottawa police, where truckers are stationed, such as jailing innocents for honking and stealing their private property: How do these jibe with the venerable documents aforementioned?

They don’t! Inherent in the first are “violations of Charter rights, including mobility, life, liberty and security of the person, privacy, and [freedom from] discrimination.”

Corporate theft has followed, courtesy of GoFundMe, a crowd-funding site which had no issue collecting and distributing funds to detritus like BLM rioters, which, by the most basic of measures, are scum of the earth. Having received $8 million in donations for the truckers, GoFundMe right away announced it would appropriate the funds and funnel them to charities listed by the Freedom Convoy 2022.

Here was a crime in progress. GoFundMe were, 1. threatening theft of private property entrusted to them, and 2. perpetrating fraud by initially promising donors to act as a trust-worthy fiduciary and then violating that promise. The thieving outfit soon backtracked when Florida Gov. Ron DeSantis threatened to stop the looting by investigating the looters.

To counter the corporate steal, GiveSendGo, an American Christian crowdfunding website, began receiving donations for the “Freedom Convoy.” To complement state-approved theft, the Ontario Superior Court enjoined GiveSendGo to stop its fundraising. The U.S.-based arm of freedom promptly gave the Canadian Kangaroo court The Finger, reminding the banana jurists of the limits of their jurisdiction.

Picture our heroes. On the one hand, you have working men and women, who already do the most dangerous of jobs, plainly often poorly clothed, trying to keep warm, as the Ottawa Gestapo steal their fuel jerricans and their fire wood. Yet wave the Maple Leaf Flag patriotically the truckers do, as their loathsome overlords level the worst possible pejoratives at them.

On the side of Gangland Government, you have a pompous, vainglorious, plodder press, and mean-minded media bad mouthing good people. And a cowardly, morally craven prime minister who initially ran from his official residence, rather than meet with a large swath of the Canadian people, whom he assiduously blackens as marginal, insufferable, and unsavory.

Juxtapose truckers and families, the epitome of storybook goodness, with the charmed circle of that privileged ponce, Justine Trudeau. Words fail. In fact, my good friends at Junge Freiheit, a German weekly of excellence, had requested I write a 5,000-word piece about Justine. My reply:

“Trudeau is not worth 5,000 words — for how do you write so much about a nullity?” I’ve come up with just the right number of words for him. Here they are:

Trudeau is a dim dilletante, who inherited wealth, but no sense of noblesse oblige and none of his fabled father’s smarts and charisma. Just look at sonny boy’s mincing stride, sausaged as he is in designer suits. Observe the vain coif, the pasty, rapidly aging (from moral rot à la Dorian Gray) doughy face and hollow gaze, so like that of his mom, Margaret.

Justine was practically conceived and raised at the debauch Studio 54. In all his forced, affectatious attempts at gravitas, this dirigiste is now telling Canada’s salt of the earth, the truckers, to turn tail and return to life as his much-maligned second-class subjects.

A look at Trudeau’s demonic deeds and his vacant demeanor and one is reminded of the words of famed French novelist Jules Renard: “I don’t know if God exists, but it would be better for his reputations if he didn’t.”

Trudeau has inflicted horrifying material destruction and lasting moral damage. He has battered the truckers but not bettered them. It’s time for this dreck, this spawn of Studio 54, to go on home, for good. Good people want no truck with Trudeau.