CNN's Zakaria Is Clueless: China Is Reactionary, Returning to Confucianism; Not Communism 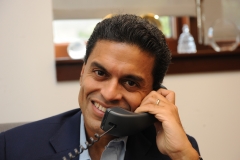 Fareed Zakaria is a CNN serial plagiarizer. Like another CNN offender, online onanist Jeffrey Toobin, Zakaria is forever forgiven and brought back from literary purgatory, to inflict mediocre, user-friendly, neoliberal/neoconservative statecraft and foreign policy on viewers who're none the wiser.

Zakaria recently broadcast a television special, “China’s Iron Fist." He called China “the most serious competition the United States has ever faced. The Chinese are doing AI, biotech, hi-speed rail – the industries of the future.” As if competition were a crime.

Zakaria also joined others of a neolib/neocon meddler mindset in ragging the Chinese for “repression at home”— does he know China’s not his home?

As did Zakaria grumble about a declining free market, and “stronger insistence on communist ideology in every sphere,” to say nothing of a “more aggressive policy abroad.” From Zakaria’s perspective, aggression abroad is the sole prerogative of America. Curiously, Zakaria made no mention of China’s culpability in the COVID calamity. Or, of China’s disregard for and consequent plundering and polluting of the natural world, critters, and their habitat, especially.

The broadcast was the familiar, simpleton’s Disneyfied, angels-and-demons foreign policy storyline. To wit, multicultural, democratic America is an oasis of freedom and happiness. China — having actually morphed into quite the middle-class, materialistic, consumerist society — is the opposite of all that; less western, less worthy. The West being the best, such a trend is to be condemned. The Chinese are 92 percent ethnically Han and rather like their nationalistic, monolithic country—a fact that has no relevance in the meddler’s mindset.

The American foreign-policy elite's Sinophobia is a distraction from the fact that the Chinese ruling elite generally acts in the national interest; whereas the American ruling caste acts in ways so antagonistic to its people's welfare as to constitute treason.

The acid observations of The Economist are infinitely wiser, certainly calmer than Zakaria’s: "China’s leaders still want investment and technology from the West, but they think it is in decadent decline and are decoupling from Western norms and ideas."

This point needs refining, because, while rejecting the West’s degenerate direction, China has selectively embraced many of the West’s highest achievements. For instance…

Enabled by indulgent and permissive parents and pedagogues, America's youth have become increasingly licentious, lippy, and libertine. Most are ignorant and lousy at writing, reasoning, and conversing coherently about anything other than raaaaaacism. They have also become un-moored from their finest traditions. The Chinese — who seem to know what’s good — are returning to things classical, traditional, and eternally and universally beautiful.

“Once, classical music generally travelled from the West to the rest,” marvels the Economist. “Now China is reversing the exchange, not merely performing Western classical music in China, but exporting it.”

Taste is subjective, but standards are objective.

Properly categorized as street theatre, not music, rap and hip-hop are, objectively speaking, gutter culture, certainly without any musical merit, technically and tonally. The hip-hopster or rapper hoots and gestures obscenely like a primate in heat. The movements that accompany the atonal grunts are a simulation of animalistic sex, the call of the wild, if you will. It’s repulsive. Are Chinese leaders wrong to want none of it?

Zakaria’s assertion that China is returning to communism, moreover, is shallow, even stupid, given the concerted quest among Chinese to reverse the Communist Cultural Revolution and reclaim Confucianism, which is antithetical to communism.

While America crumbles into a deadening, brutal wokeness; China, interestingly, seeks spiritual sustenance in its ancient, grand tradition of Confucianism.

Native to China, Confucianism was decimated by socialism, which — Mr. Zakaria may have forgotten — came out of the West. Unlike our own Traitor Class, China’s leaders know what succors the soul, and they want to infuse the nation with that home-grown cultural sustenance.

The Chinese are not a multicultural pottage; they are a real nation that shares a rich and ancient culture. The beauty of a shared, admired heritage is that the country can reclaim it as it works to reverse the foreign cultural revolution, which forbade Confucianism. And indeed, "Chinese parents are keen on a more Confucian education," confirms The Economist.

Core curriculum and Western classical texts have been all but purged from American schools. In China, the number of “classical texts to be taught in schools has increased from 14 to 72.” From here on, China’s kids will be “learning classical Chinese thought, texts, and morals, especially those associated with Confucius.”

So, which is the more exulted and elevated quest, Confucianism or charter schools?

As you see, Zakaria’s rah-rah America uber ales hysteria with respect to China is worse than incomplete; it’s half-assed.

And who is behind this mission to elevate his people, not mire them in the dreary, postmodern deconstructionism into which America’s wokerati have plunged our now institutionally radicalized country? No other than President Xi Jinping. He “has done more than any other modern leader to elevate Confucian ideas.”

Bereft of American-style multiculturalism to hobble the national spirit, and with all their Muslim population ruthlessly controlled to eliminate even the slightest threat of terrorism against the majority population — there is indeed no stopping the Chinese.

In 1949, during “the Cultural Revolution, Mao exhorted the Chinese to smash anything old.” À la Antifa, “Gangs of Red Guards swarmed Qufu, [Confucius’s] hometown, and blew up his tomb.” Americans have arrived at that point. They are purging their foundational teachings and obliterating memorials and mementos to their spiritual fathers. Been there, done that, say the Chinese.

Ilana Mercer has been writing a weekly, paleolibertarian think piece since 1999. She’s the author of Into the Cannibal’s Pot: Lessons for America From Post-Apartheid South Africa (2011) & The Trump Revolution: The Donald’s Creative Destruction Deconstructed” (June, 2016). She’s on Twitter, Gab, YouTube & LinkedIn; banned by Facebook, and has a new video-podcast.