Losers: Markle and a McCain. Winner: The Queen 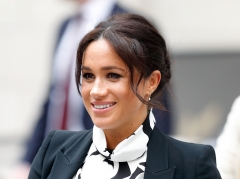 Fancy that! A member of a meritless political dynasty, the McCains, has criticized the duty-bound British monarchy.

There is a revolving door between Big Media -- be it the neoliberal CNN or neocon Fox News -- and members of the political duopoly. Whether practiced by the left or the right, this is indisputably immoral and a conflict of interest.

At the conclusion of a wishy-washy Fox segment about the wanton Meghan Markle, the man who had married into the McCain political dynasty declared:

There is nothing more American than hating the British Crown.

That’s a shallow stance at best. For, if forced to choose between the mob (democracy) and the monarchy, the latter is far more preferable and benevolent. This thesis is anatomized in "Democracy: The God that Failed: The Economics and Politics of Monarchy, Democracy, and Natural Order" by libertarian political philosopher Hans-Hermann Hoppe.

In his seminal work, Hoppe provides ample support—historical and analytical—for democracy’s inferiority as compared to monarchy:

Democracy has succeeded where monarchy only made a modest beginning: in the ultimate destruction of the natural elites. The fortunes of great families have dissipated, and their tradition of a culture of economic independence, intellectual farsightedness, and moral and spiritual leadership has been lost and forgotten. Rich men still exist today, but more frequently than not they owe their fortune now directly or indirectly to the state....

In light of elementary economic theory, the conduct of government and the effects of government policy on civil society can be expected to be systematically different, depending on whether the government apparatus is owned privately or publicly.

“From the viewpoint of those who prefer less exploitation over more and who value farsightedness and individual responsibility above shortsightedness and irresponsibility, the historic transition from monarchy to democracy represents not progress but civilizational decline," he continues.

The raw, ripe, rule of the demos has diminished the queen, but has yet to destroy her. Queen Elizabeth might be a member of a landed aristocracy, much-maligned in radical America—but she has acquitted herself as would a natural aristocrat.

Elizabeth II has lived a life of dedication and duty, and done so with impeccable class. Her Majesty has been working quietly (and often thanklessly) for the English people for over half a century.

Elizabeth Windsor was 13 when World War II broke out, which was when she gave her first official radio broadcast to console the children who had been evacuated from America, Britain, Canada, and elsewhere. Still in her teens, Elizabeth joined the military, where she gained experience as a mechanic and driver.

Question: What was Markle—a divorced, mercenary left-liberal out of Hollywood, who had hunted Prince Harry down and married him—doing when she was a teen?

Answer: Markle was preaching pious, hackneyed, feminist homilies on the Nickelodeon channel! There, aged 11, Markle turned in a performance as a miserable, humorless, unoriginal scold, sharing banal views held by 99 percent of the American establishment.

In 2017, this writer had predicted, too hastily, that Markle, an American C-list actress, would finish what Diana Spencer, a British A-list actress, had begun: destroy the monarchy.

In 2021, Prince Philip, of blessed memory, had been teetering when his grandson’s American bride gave the performance of a lifetime, alongside the Queen of Kitsch, Oprah Winfrey.

A disgrace to decent Americans, the woman’s sordid, petty psycho-drama had exposed Markle in all her tacky tawdriness. An empty “suit,” if you will.

A brother on the set of “Suits,” Markle’s televised claim to fame, said it best:

The queen won’t outlive Meghan Markle, but she dwarfs the ditz.

As to Ben Domenech’s point: Were the conservative, periwigged Englishmen who founded America to pounce back on to the set—they, too, would favor the monarchy over the current American mobocracy.