The OMG! Variant and the West’s Disgraceful Response 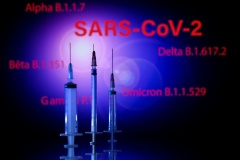 This photograph taken on Dec. 2 shows a syringe and a screen displaying the main COVID-19 variants. (Photo credit: LIONEL BONAVENTURE/AFP via Getty Images)

South Africa has practiced and modeled good science and good sense. Dr. Angelique Coetzee (pronounced koot-see-a) was among the first to alert South African epidemiologists to what has now been named the omicron variant of COVID-19. Or, as dubbed here, the “OMG! variant.”

A calm clinician, Coetzee had deduced that what she was seeing in her patients—and successfully treating—was a heretofore unseen COVID variant with attendant mild disease.

Quickly were South Africa’s skilled and responsible epidemiologists alerted and the genetic sequencing commenced. And, voila: A mutation! Also a completely unremarkable occurrence in the annals, and course, of epidemics. As molecular evolution and virology tell us, viruses — clever little RNA strands that they are — mutate during disease outbreaks without significant impact on the outbreak.

By the good doctor’s summation, “I’ve seen nothing in this variant that warrants Britain’s extreme response to it.” Ditto that of the rest of the world.

Coetzee and her colleagues were the ones encountering and treating omicron; but the cretins at the helm of the international COVID cartel, based in D.C., had all the answers. Nobody was going to cramp their style, not least a stoic, calm, rational clinician in the thick of it. Ethics and efficacy be dammed, travel to and from a poor nation, South Africa, was forthwith suspended. After all, unlike “the world’s factory,” China — free to spread disease with impunity — poor nations are incapable of retaliating.

So, while clinicians on the ground met omicron with equanimity; Western politicians working the pandemic and armed with not much more than ignorance sprung into Brownian motion.

Besides, aside from eminently reasonable calm—the South Africans were imparting a tidbit the television doctors and the pandemic’s political manhandlers were not keen to share: There were vaccinated people among “the new omicron variant sequenced in 77 cases.”

This is not to say that infections are not up in South Africa —  and beyond: Omicron is now in Botswana, the United Kingdom, Germany, Belgium, the Czech Republic, Israel, Australia, Hong Kong, and the United States. But it is mortality that matters; not infections, with which we must learn to live.

The inconvenient truth so far is that “there have been no reported deaths linked to the omicron variant,” a tidbit buried in the seventh paragraph of this NPR article.

The corrupt COVID cartel includes politicians, heavily vested clinicians with gigs on TV (and book deals in the pipeline), and, naturally, moneyed vaccine manufacturers: The CEOs of Moderna, Pfizer, BioNTech, and Johnson & Johnson. And, what do you know? Producers of the vaccines available in the America all intend on updating their vaccines or putting out a separate Omicron vaccine.

Make ‘em and mandate them, right?

Can there be a better marketing strategy? Treatments have been discouraged, heavily circumscribed — even punished — and centrally controlled and regulated by the Pharma State. No well-controlled, longitudinal, safety studies are required in order to unleash these intravenous (officially intramuscular) potions upon the public. As to liability: "For decades, vaccine makers have been shielded from product liability lawsuits thanks to the National Childhood Vaccine Injury Act of 1986."

The preponderance of litigation under the Countermeasures Injury Compensation Program fails, confirms Reuters.

Thus can vaccine-makers just make ‘em and wait on The State to mandate them.

WATCH & SUBSCRIBE: “Dorsey Out, Even More Woke In; And The OMG! Variant Whacks The West."