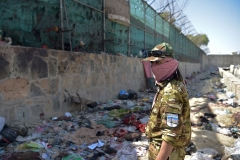 A Taliban member is featured at the site of an ISIS-K suicide bombing that killed 13 U.S. service members. (Photo credit: WAKIL KOHSAR/AFP via Getty Images)

You might have heard Logan claim that everything in the world is simple.

“It's very simple,” she said on "Tucker Carlson Today."

Applied to the fiasco in Afghanistan, Logan’s Theory of Simple is that, considering that America is omnipotent, whatever occurs under its watch is always and everywhere planned and preventable.

Ridiculous and wrong, yet Tucker, whom we all love to bits, giggles in delight.

“They want you to believe Afghanistan is complicated,” lectured Logan. “Because if you complicate it, it is a tactic in information warfare called ‘ambiguity increasing.’”

“So now we’re all talking about the corruption and the this and the that,” she further vaporized. “But at its heart, every single thing in the world…always comes down to...one or two things….”

Logan likely recently discovered Occam’s Razor and is habitually applying this principle to anything and everything, with little evidence or geopolitical and historic understanding in support of her Theory of Simple.

Occam’s Razor posits that, “the simplest explanation is preferable to one that is more complex,” provided “simple” is “backed by empirical evidence.”

A nifty principle—and certainly not a philosophy—Occam’s Razor was not meant to apply to everything under the sun.

Misapplied by Logan, why? Primarily because Logan’s explanation for America’s defeat in Afghanistan—that the United States threw the game—is hardly the simplest explanation, despite her assertion to the contrary.

The simplest explanation to the U.S. defeat in Afghanistan, based on as much information as is possible to gather, is that, wait for this: America was defeated fair and square. As this columnist had argued, the U.S. was outsmarted and outmaneuvered, in a mission impossible in the first place.

Unlike Logan, who is convinced America could have won a war other superpowers had lost, Mike Martin, a former British army officer in Helmand province, now at King’s College, London, had this to say about the ragtag enemy:

This was “probably one of the best conceived and planned guerrilla campaigns ever. The Taliban went into every district and flipped all the local militias by doing deals along tribal lines.”

What do you know? The Economist also did not seek “simple” in its postmortem on “why America failed in Afghanistan.” Instead, the august magazine called on Henry Kissinger, a stateman with a sinewy intelligence, for his analysis.

Tribal Afghanistan is thoroughly decentralized, always has been. Our indisputably brave soldiers had been ordered to, at once, woo and war against a primitive Pashtun population that disdained the central government we were dead set on strengthening. (“Afghanistan: A War Obama Can Call His Own,” 2008)

Since Baksheesh (bribery) is in the political bone marrow of Afghanistan, American money and profligate spending habits only fed this proclivity for pelf and strengthened feudal fiefdoms and warlords.

And Afghans simply have more of an affinity for the Taliban than for the Wilsonians who were attempting to westernize them. Those we collaborated with are currently being called “our allies.” But it was not uncommon to hear of an Afghan policeman or soldier leading our men into an ambush, or opening fire on his American "colleagues," during a joint operation.

Now, all we hear from many a Rambo Rescuer is of the urgency of bringing these “Afghan allies” to America. But, back in the day, it was curiously observed that the Afghani soldiers “fighting” alongside our men frequently suffered few casualties; Americans invariably paid the price. In 2009, I quoted Specialist Raquime Mercer, 20, whose close friend died in one of those attacks by an “ally.” He said: “You don’t trust anybody."

Now we consider them trustworthy—even eligible to take up residence in our neighborhoods.

Wrote Jim Sauer, a “retired Marine Corps Sergeant Major and combat veteran with over thirty years of service” (2009), about our Afghan allies:

The Taliban does not speak for the small sector of Afghans groomed by America during the occupation. Widely supported by most Afghanis, however, the Taliban tried to tell us that, “the presence of infidels in a Muslim country is a…sin,” and that they would not tolerate the “accursed Western invasion, which [was] forcing itself upon us in the name of democracy.”

Kissinger agrees, speaking about the occupation as “a process so prolonged and obtrusive as to turn even non-jihadist Afghans against the entire effort. Afghanistan,” writes the elder stateman, “has never been a modern state. Statehood presupposes a sense of common obligation and centralization of authority. Afghan soil, rich in many elements, lacks these.”

Islam. Occupation. Tribalism. Traditionalism. Baksheesh in the blood. Only simpletons think failure in Afghanistan was simple.