Resist the Left's Conflation of 'Racism' With the Law, for Chauvin and Beyond 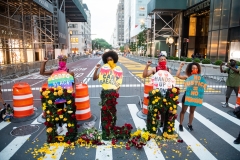 Racism consists of a mindset or a worldview that boils down to impolite and impolitic thoughts and words written, spoken, preached, or tweeted.

If that’s all racism is, you ask, then what was the knee on George Floyd’s neck? Was that not racism?

Judging from the known facts, the knee on Mr. Floyd’s neck was a knee on a man’s neck. That’s all that can be inferred from the chilling video recording in which Floyd expired slowly as he pleaded for air.

Floyd begged to breathe. But the knee on his neck—“subdual restraint and neck compression,” in medical terms—was sustained for fully eight minutes and 46 seconds, causing “cardiopulmonary arrest.”

There are laws concerning what transpired between former Officer Derek Chauvin and Mr. Floyd.

And the law’s ambit is not to decide whether the offending officer is a correct-thinking individual, but whether Mr. Chauvin had committed a crime.

About Officer Chauvin’s mindset, the most the law is supposed to divine is mens rea—criminal intention: Was the officer whose knee pressed on Floyd’s neck acting with a guilty mind or not?

For fact-finding is the essence of the law. The law is not an abstract ideal of imagined social justice, that exists to salve sensitive souls.

If “racism” looks like a felony crime, then it ought to be prosecuted as nothing but a crime and debated as such. In the case of Mr. Chauvin, a mindset of depraved indifference seems to jibe with the video.

This is not to refute the reality of racially motivated crimes. These most certainly occur. It is only to refute the legal and ethical validity of a racist mindset in the prosecution of a crime.

Surely, a life taken because of racial or anti-Semitic animus is not worth more than life lost to spousal battery or to a home invasion.

The law, then, must mete justice, in accordance with the rules of evidence, proportionality, and due process. Other than intent, references to the attendant thoughts that accompanied the commission of a crime should be irrelevant—be they racist, sexist, ageist, or anti-Semitic.

Ultimately, those thoughts are known only to the perp.

To make matters worse, legions of libertarians and conservatives have joined the progressive establishment in the habit of sniffing out and purging supposed racists, as though they were criminals.

Sniffing out thought or speech criminals is a no-no for any and all self-respecting classical conservative and libertarian. We should never persecute or prosecute thought “criminals” for utterances not to our liking (unless these threaten or portend violence).

If those who think and speak the unthinkable don’t act out in violence—it is incumbent upon civilized citizens in a free society to refrain from doxing, firing, cancelling or otherwise hounding dissidents to suicide.

In the case of criminal acts of aggression, racist thoughts or taunts that accompany the violence should be irrelevant.

If all lives matter, then the targeting of one innocent because he is Jewish or black is not more egregious an offense than the harming of another innocent for any other reason.

Thoughts and words spoken or written that are not politically polite—for example, racism—ought to retain protected status as speech beyond the adjudication of law-makers, bureaucrats, mediacrats, educrats, and technocrats.

Good people are being pushed to the floor. The mental anguish and material loss that a mere accusation of racism carries in America is untold. It’s crystal clear that the constitutional freedoms guaranteed by the First Amendment to the Bill of Rights have been lost and alienated.

In 1978, the American Civil Liberties Union (ACLU) “took a controversial stand for free speech by defending a neo-Nazi group that wanted to march through the Chicago suburb of Skokie, where many Holocaust survivors lived.”

These days, this once-venerable champion of unpopular expression no longer vigorously defends marginalized speakers and thinkers. Instead, the ACLU is purveying and protecting the ideology du jour.

Paradoxical as it may seem, the ACLU defrauds the public about its mission when it devotes its resources to the popularized causes of the Left’s privileged populations: LGBTQ demands, illegal immigrant claims-making, seekers of abortion-on-tap, looters of property, and destroyers of peace and prosperity (in Orwellian speak, “peaceful protesters”).

The ACLU is a disgrace to its proud roots. In retrospect, a return to the good old days of ACLU free-speech radicalism is required.

In the current climate—and considering the inherently paranoid style of American politics—it’s worth contemplating special protections for politically impolite, racist speech, to be offered by a loose association of employers in the private sector and across civil society.

As I’ve argued here, racism amounts to a thought “crime.” Thought crimes are the prerogative of a free people. To intellectually disembowel the Left, the Right must unapologetically reject the very idea of policing, purging, and persecuting people for holding and expressing politically unpopular ideas.