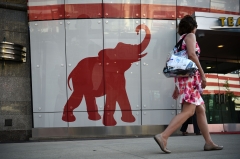 In his June 20, 2020 J'accuse, Tucker Carlson, for all practical purposes, cancelled the Republican Party:

"When the moment of crisis came, Republicans ran away," he roared. "Major American cities were looted and burned on television. Citizens were beaten and murdered. Works of public art were destroyed by the score. America's history, those shared experiences that bind us together as a nation, was plundered and complete rewritten by illiterate vandals. Everywhere, as they watched, Americans were afraid -- afraid not simply for their safety but afraid for their jobs, their reputations, afraid for their families....And the question that hangs in the air is: where are our protectors?...The president of Heritage wrote an op-ed accusing America of being irredeemably racist...so many on the Right did exactly the same thing."

Jack Kerwick has been anatomizing just such failures and betrayals dished out by the ConOink establishment for over a decade, writing in January of 2021, of virus-related tyranny that,

“…the country bequeathed to us by the generation that, in the midst of a smallpox epidemic, fought and defeated the most powerful empire in the world in order to be a self-governing union of sovereign states — subjected itself to a nationwide internment.

The United State[s] of America became the Interned States of America as the Constitution of the Old Republic was indefinitely revoked, the economy crushed, and ‘the little platoons’ — as Burke referred to those buffers between the individual and the State, those forms of community constitutive of civil society and in the absence of which human flourishing would be impossible — were radically undermined.…And all of this occurred in a country with a Republican President, a Republican-controlled Senate, a Supreme Court dominated by Republican appointees, and a majority of whose state legislatures and governors are Republican.” [Emphasis added.]

As captivated as voters on the right may be by the promise of the primaries, they’d be wise to remember the nature of the Republican Racket — the duopoly or uniparty swindle, for that matter.

You’ve been here before. Elections in our country are a national bipolar mood disorder that sees our side, the Right, swing from halcyon highs under the Stupid Party to nadir lows under the Evil Party, except that there never is long-term, real relief.

With a difference. Something huge happened in our country in the past few years. It is not hyperbole to say the republic has been lost. To paraphrase the great Naomi Wolf, we are at a civilizational crossroads, still living under emergency law, the Constitution suspended. We’ve adjusted to tyranny and no one is the wiser.

Certainly not any Republican.

Some of us have long held that the republic of blessed memory was lost ages ago. Others still hold out hope for a small “r” republican revival. Even the most Panglossian among us must acknowledge that a tipping point was reached during COVID.

The Democrats have always set the terms of debate; Democrats stand tall for their core principles, as atrocious as these manifestly are.

Consider: How does the illiberal left deal with Republicans? They leverage against their political opponents the full force of the managerial, permanent state, which they’ve captured. They galvanize the DOJ (Department of Justice), the Security and the Surveillance State to destroy as many conservatives as possible. Rivulets of words like “treason” and “white supremacist” soon run through the Democrat-dominated media and through other intellectual means of production captured. Subpoenas are issued. Congressional hearings are hastily begun; impeachment proceedings set in motion. The criminal arm of the Democrat Party is marshaled in quick succession. These vampiric operatives — BLM, Antifa, demented distaff — are soon staking out, stalking, and canceling conservatives, making life intolerable. Simultaneously, and in addition to utterly demonizing their opposition, Democrats typically plug away at making the country ungovernable, lawless, diverse to the point of distrust.

Against the potency of the Democrats, Republicans offer only impotence. At every turn, they apologize and expiate for their principles. Their feeble reaction to Democrat depredations, in general, has the effect of normalizing decadence, degeneracy, lawlessness, and breakdown of all standards — the systemic institutional rot that is convulsing the country. Republican reaction to a steady stream of brazen invaders breaking the Southern border, in particular, is to whinge ever-so occasionally and oh-so softly.

By Republican telling, it is the Democrats who made immigration enforcement impossible. Not so! George Bush would still wrestle a crocodile for an illegal immigrant. Collaboration between the parties over the years codified into law that no invader could be turned back. By mutual agreement between the parties, no sooner do these criminal aliens cross into the United States and plonk themselves on our side of the Rio Grande — than they must be “processed” and released, never booted. The Wall was always meant as a cheap election ploy to excite the febrile imagination of the voter. That, Donald Trump understood. So, instead, the former president did an ingenious workaround: Trump “erected a bureaucratic wall that expelled unauthorized immigrants on the southern border,” forcing them to bunk-down in Mexico.

Back to COVID: Is there one GOPer running in the primaries who has promised and comprehends how to ensure that no centrally or locally directed lockdown will ever occur again? Any conservative campaigning on a serious examination of lockdown crimes against the citizens and travel restrictions on the unvaxed? Has even one of the Republican candidates traipsing through Fox News’ green room addressed the creation of an unvaccinated underclass (villains all) and a vaccinated upper-class (virtuous)? Who among those clawing their way to D.C. has even mentioned the fact that we the unvaxed are still being denied access — based not on active aggression we’re committing, but rooted in our peaceful rejection of the corporate, State-mediated aggression against us: We won’t take the Hemlock.

Is a single Republican proposing to ensure that never again will the medical idiocracy — bona fides established during the pandemic — come between a dying patient and his family?

Remember how Republicans, during COVID, would prattle about religious exemptions (state-granted!) and natural-immunity based exemptions (state-granted!) — but had not the faintest urge to defend the natural, God-given right of self-ownership? I do. You should, too! Almost to a man did most of the Republicans we endured on TV during COVID prance onto the set, boasting self-righteously: “I’ve had the vaccine, I’m for science, but I support the rights of my rube-hick constituents to reject it.”

Anyone running to permanently restore due process of law lost by so many Americans, especially the Jan. 6 dissidents? Show me the Republican who is able to articulate that, no, we don’t need new laws. No other country has as many laws as the United States Code. (Attempts to count the number of laws scattered over upwards of 23,000 pages have failed.) How about electing people who understand how to uphold rights already instantiated in the founding documents, and forcefully enforce the laws that ensure ordered liberty?

In this context, has Rep. Chris Stewart (R-UT) heard about the Fourth Amendment to the United States Constitution? Tucker Carlson invited this prototype Republican to talk up legislation to outlaw the Surveillance State (National Security Agency spying on us), all TV theater and farce. The Fourth Amendment already does that.