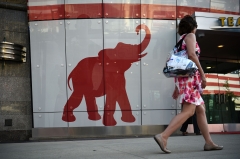 It matters not that the few "Republican governors crusading against vaccine mandates are [allegedly] facing significantly lower approval ratings on their handling of the coronavirus pandemic than their counterparts," as Politico purports. (Don't believe Politico!)

What matters is that governors like Texas' Greg Abbott, who "flat-out banned vaccine requirements, and Florida Gov. Ron DeSantis, followed up by vowing to sue the Biden administration."

The Biden reference is to a recent, highly contrived CNN townhall, during which “moderator Anderson Cooper noted that as many as one in three emergency responders in some major cities are refusing to comply with city vaccine mandates.”

"I'm wondering where you stand on that," inquired Cooper. "Should police officers, first responders be mandated to get vaccines? And if not, should they be mandated to stay at home, let go?"

“Yes, and yes,” replied the president.

Disinterred for the day, Biden went on to mock the quaint notion of bodily autonomy with a demented quip, "I have the freedom to kill you with my COVID. I mean, come on, freedom."

Bodily autonomy, self-determination, and self-ownership: Were our representatives to frame the vexation of vaccine mandates in the correct language of natural rights—we'd get the right answers, more likely to be followed by rights-upholding legislation.

When it comes to COVID-19, only the following arguments are permissible as an objection to the COVID vaccine mandate. "Exemptions from employer-mandated coronavirus vaccines [are] in [these] three general areas":

One hears also a perfectly calm case being made on the left for outcome-based coercion: “rights-violations work well to bring about vaccine-compliance, so let’s violate us some rights.”

Outcome-based argument for coercion is a scandal, instantiated in Dr. Leana Wen’s positions:

Wen, an emergency physician and public health professor at George Washington University, said she approves of the administration’s push for employer-based mandates because “frankly nothing else was working.”

As an objection to the COVID vaccine, nowhere is a rights-based argument being made, or an argument based on the right to question the safety of a vaccine being advanced by the covidiots who lord it over us or claim to represent us. Again, "Exemptions from employer-mandated coronavirus vaccines are in three general areas" only.

Indeed, Republicans prattle about religious exemptions (state-granted!) and natural-immunity based exemptions (state- granted!)—but they have not the vaguest urge to defend the natural, God-given right of self-ownership.

Enough then of the cheering for the ineffectual GOP and its front men and women, who arrive in the Idiocracy’s version of Rome, only to do nothing, decade after decade. Oh, yes, they turn in appearances on TV and before congressional committees; get lucrative book deals, and consolidate political and corporate power for a lifetime.

But as the West careens toward the COVID-centered anthill society, nobody identifies and defends the individual’s dominion over his body and his right to reject the Pharma-State’s Hemlock prescription for that body. As emphasized, Republicans’ case against COVID mandates indirectly capitulates to coercion.

Historically, this has certainly been the case. During an October 19 appearance on the “Tucker Carlson Tonight,” civil-rights attorney Harmeet Dhillon explained the genesis of the current COVID corporate tyranny. Business is allowed to screen out and reject employees based purely and solely on their COVID vaccine status. The GOP (RIP) has, over decades, authored and facilitated laws the outcome of which is the current corporate tyranny. This fact needs the widest publicity possible.

Meantime, we have the ruling class, an example being New Zealand’s prime minister, Jacinda Ardern, boasting about having created an additional two classes of people in her diabolical democracy, where might makes right: the unvaccinated underclass (villains all) and the vaccinated upperclass (virtuous).

In similar vein, an Austrian chancellor revealed his plans to place Austria’s unvaccinated under house arrest. Stateside, Noam Chomsky, a progressive “intellectual,” wants to see the unvaccinated underclass reduced by the state to a "Hunger Games" type fight to survive: sequestered, waiting until dark to scrounge for scraps.