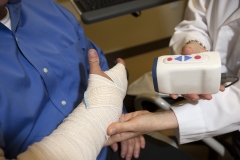 Americans have been waking up recently to the realities of the Big Tech cartel and its growing power over our economy and civil liberties. Expectations for a formal Justice Department antitrust case against Google have been growing recently, and the CEOs of both Google, Facebook, Amazon, and Apple were questioned in a Congressional antitrust hearing in late July.

Strong government and public scrutiny could help restore faith in the First Amendment and equal opportunity. But it would be even better if the public’s newfound interest in trust-busting expands just enough to help save lives.

That’s because there’s another behemoth the feds should look to take down next: the powerful physician certification giant that chokes off healthcare supply and continues to unnecessarily increase healthcare costs.

The “non-profit” organization board certifying physicians and controlling this cartel is the American Board of Medical Specialties, (ABMS) which controls the American Board of Internal Medicine (ABIM), the American Board of Emergency Medicine, (ABEM), along with 22 other medical specialties not including the more than 80 subspecialties they control as well. These entities have imposed a rigorous and all-too-frequent testing of doctors. While the normal recertification process is on an 8-10-year cycle, there are some requirements for physicians to pay annual "maintenance of certification” (MOC) fees each year. An MOC that has some experts placing their revenue at over one billion dollars – all for a “non-profit” entity.

Many hospital systems simply comply with a policy of only hiring ABMS-certified doctors and that means almost every doctor, even those in private practice who simply want to maintain certain privileges at major hospitals, need to fall in line as well. Being able to practice medicine at all in this country in any capacity is becoming something ABMS controls more than any other single entity, even the U.S. government, and it is important to note that their certification has nothing to do with the license to practice medicine.

Thus, what was once a series of courses and tests to determine a physician's excellence in practicing medicine suddenly became the process to assure a physician's adequacy to practice at all.

Of course, no one wants unqualified physicians treating anyone. But it’s important to note that the non-ABMS doctors who could be filling many vacancies across the country are simply certified by other physician certifying boards and board certification is not a requirement for licensure. In addition, the danger the cartel poses were highlighted during COVID-19 within cities like New York and Detroit. Their control limited patient access to care as non-ABMS physicians wishing to provide emergency and telemedicine services were turned away for not being an ABMS-board certified physician. This basically punishes patients and their access to care because a physician didn’t choose the right association to belong to and didn’t know the secret handshake!

No credible or documented case has been made that any physician certified by a non-ABMS entity is unqualified. In reality, it is the exact opposite. They simply do not get considered for jobs in the first place.

What does the ABMS board get from all of this power?

If you guessed: “Big bucks!” You win.

As Doctor Kevin Pho of the popular KevinMD.com website first reported in 2014, the top ABMS leadership make higher and higher salaries that far exceed the pay our front line doctors and other medical professionals gain. It doesn’t take a genius to see why these same ABMS administrators have an unhealthy vested interest in not only maintaining their grip on the market, but squeezing even more dollars out of our doctors, hospitals, and patients.

Just how deeply does the ABMS board impose its mammoth power and just how much does it cost caregivers and patients? Many of the more detailed answers to that question were recently laid out in a groundbreaking white paper by Prof. Adam Candeub of Michigan State University.

In addition to mapping out the myriad costs and added health dangers the ABMS stranglehold has created, Candeub also explains why the DOJ is needed to break this behemoth up. Simply put, nothing else short of the Justice Department seems to have the guts or the ability to do so. Even the COVID-19 crisis that placed many areas in need of emergency help didn’t put a dent in the “ABMS-only” rules at even some of the most hard-hit hospital systems.

While academics like Prof. Candeub understand this problem very well, it’s important to remember that so many of our best doctors deal with the realities of this problem every day.

One of them is Dr. Karl Kelley. After the Vanderbilt University hospital system acquired his local hospital system last year, he’s suddenly not cleared to work because Vanderbilt is extending its rule that all its physicians be certified by ABMS and only ABMS. It should be noted that he is board certified by the American Board of Physician Specialties (ABPS) in Disaster Medicine, and he actually contributed to the national response plan for disasters and pandemics. But it doesn’t matter that Dr. Kelley is so experienced, so respected, and probably more qualified than any medical professional could ever hope to be.

It doesn’t matter that finding and keeping good doctors in non-urban centers in America is becoming a greater and more dangerous challenge every year.

It doesn’t matter that Dr. Kelley is already certified in Disaster Medicine by a reputable board that just happens to be unaffiliated with ABMS.

All that matters is keeping that cartel alive.

So many other doctors from different parts of the country tell me that while they support continuing education, they believe they're being squeezed unnecessarily by organizations that have a financial incentive to continue to squeeze them. One physician told me he's thinking of hanging a sign up outside his office that says: "The doctor can't see you now; he's studying for another useless test."

In addition to the expected antitrust push against Big Tech and Prof. Candeub’s timely study, there’s another reason why now is the perfect time to take on the ABMS chokehold.

The recent Trump administration court victory on hospital and insurance company pricing transparency has introduced another common sense platform for reducing health care costs. Of course, the hospital and insurance companies fought the measure and continue to argue that revealing prices won’t drive them down. But as every common sense consumer knows, when providers of goods and services can keep their prices hidden, the consumer’s freedom to choose the best deal is destroyed. Publishing prices for medical procedures and other treatments, especially in the areas in this country that still have multiple health provider choices, will undoubtedly lower prices, improve care, or achieve both.

Notice that the operative word here is “care,” as opposed to health “insurance.” While Obamacare may have reduced the cost of health insurance in some cases, the public continues to predictably suffer under higher costs for healthcare. The fact that the public and the news media continue to conflate the two has done us no good. Millions more people received health coverage or were put on the Medicaid rolls because of the Affordable Care Act. But this also occurred during a time when the total number of doctors was shrinking across much of the country and hospitals continued to consolidate at a record pace.

It’s simple: More customers + fewer service providers = higher costs. And that equation is true with or without Obamacare.

That’s why focusing on the ABMS certification stranglehold would be so effective and educational at the same time. As soon as Americans learn about the hefty and growing cost and time demands the ABMS certification cartel is imposing on our doctors and the hospitals who employ them, they’ll surely support any effort to break up the behemoth and provide cost relief that will stretch across the board. Just like the common sense thinking behind the price publishing rules, this is Economics 101.

One hundred and twenty years ago when President Theodore Roosevelt became known as the great “trust buster,” it’s important to note that he didn’t stop at just one industry’s dominance of a market. T.R. made sure that the Sherman Antitrust act affected a wide array of harmful business combinations that were restricting free trade.

Today, the Trump administration should not stop with the Big Tech industry. As more and more Americans become aware of the massive power Silicon Valley’s titans hold over social media and online publishing, the public is more than ready for a new era of trust busting that stretches across the nation’s economic spectrum. And with healthcare resources also in a bigger spotlight than usual, one of the first places to expand the government’s antitrust efforts is to ABMS and its unhealthy hold on America’s healthcare providers.

Jake Novak is an editorial contributor for CNBC who previously created "Varney and Company" on Fox Business and served as executive producer of "The Kudlow Report" on CNBC.