Academia is adrift in a sea of low standards 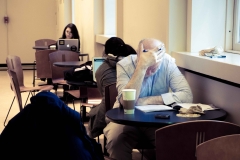 Arum and Josipa’s research, which, starting in 2005, followed 3,000 students over 4 years across 29 colleges and universities, “documents that many contemporary college students enroll in courses that do not require either substantial writing or reading assignments.”

“In a typical semester, 32% did not take any courses with more than 40 pages of reading per week and 50% did not take a single course in which they wrote more than 20 pages over the course of the semester,” the authors write in an academic article summarizing their work.

These results are more than a decade old, however, and almost nothing has been done to remedy the trajectory of higher education.

In his September 16 op-ed, Campus Reform Higher Education Fellow Nicholas Giordano revealed that his students cannot pass “a citizenship exam asking very basic questions about our founding and our system of governance.”

Questions on the exam Giordano gives to his students include, “Who is the Speaker of the House?,” “Which branch of government has the power to declare war?,” “Who is considered the father of the Constitution?,” and “How many Supreme Court Justices are there?”

According to Hess, an “Alarming [Number] Say ‘Yes.’” Pointing to a survey by Intelligent.com, Hess argues that college students want classes to be easier.

Of 1,000 college students surveyed, the majority expressed that at least one class in their schedule was too difficult and that the university should force professors to make classes easier.

Frighteningly, New York University actually took the step of firing Maitland Jones, an organic chemistry professor at NYU, after several students complained that his chemistry class was too challenging.

Campus Reform covered the incident in October, and reported on a number of responses from professors who were unsettled by NYU’s decision.

Proving that the incident was not to be just a media talking point, Johnathan Zimmerman, Howard Berkowitz Professor in Education at the University of Pennsylvania, charged that Jones’ firing would lower academic standards as professors would fear that challenging students would be met with backlash.

“[I]f New York University fired Maitland Jones Jr. for maintaining high standards in his organic chemistry class, every professor in America should be outraged. And we should be scared, too, because it now seems like many of us can lose our jobs if we demand too much from our students,” Zimmerman argued.

The demand to make classes easier, however, comes at a time when classes are as easy as they ever have been.

Yet, while students read significantly less and admit to coming to class unprepared, many of them still receive “A’s.”

Hess referred to college as a vacation, writing that “[w]hether or not students have other interests or responsibilities, treating college as an expensive multiyear holiday isn’t good for students, colleges or the taxpayers who subsidize much of this activity. And it’s insulting to all those young people who routinely put in 10-hour days waitressing, driving trucks, working construction and otherwise keeping us fed, clothed and housed.”

Academically Adrift should have sparked immediate action to remedy our failing higher education system, but the standards keep getting worse and students’ tolerance for challenges keeps getting lower. Students need to shape up and be held to higher standards.